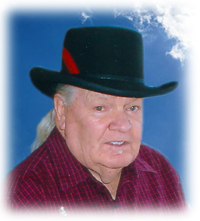 It is with great sadness that the family of Dennis Keating Ramsdale announce his peaceful passing on Monday, April 27, 2015, at the age of 80 years. Dennis was born in Red Jacket, SK., on December 24, 1934. Along with his loving wife Doreen, he leaves to cherish his memory: son, Brian (Gwen); daughter, Brenda; two granddaughters, Nicole (Gavin) Brinsmead and their sons, Declan and Keenan; Kallie (Jaydee) Freimark and their daughters, Isabelle and Emma; one sister, Eileen as well as two step-sisters, Doreen and Donna. He was predeceased by his parents, two brothers, one step-brother and one step-sister. Dennis was a private person who cared deeply for his family. He especially enjoyed spending time with his grandchildren. Dennis made life enjoyable for those around him. He loved wearing his cowboy hats as well as telling stories and jokes, especially while at McDonald’s for coffee. Dennis enjoyed owning and restoring his vintage cars, wood working, sports and his trips to Las Vegas. At Dennis’ request, a Private Graveside Service will be held honouring his life at Hillside Cemetery with Life Celebrant Gerry Getz officiating. (Condolences may be expressed by visiting www.cooksouthland.com) If friends so desire, donations in memory of Dennis may be made to the charity of one’s choice. Honoured to serve the family is

One Condolence for “DENNIS RAMSDALE”