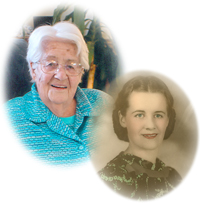 Margaret Freeman (nee Greaves) passed away on Friday, May 1, 2015, at the age of 99 years. She leaves to mourn her passing nine children: Dennis (Joan) of Edmonton, AB., Barry (Mara) of Olds, AB., Ron (June) of Medicine Hat, Judith (Bruce) Yemen of Ottawa, ON., Glenn (Sandy) of Edmonton, AB., Randy (Pat) of Yellowknife, NWT., Linda (Don) Anderson of Stettler, AB., Greg (Deborah) of Chilliwack, BC. and Deborah (Dale) Bolton of Medicine Hat. She will also be fondly remembered by her 18 grandchildren and 19 great-grandchildren as well as her brother, Ray Greaves of Brooks, AB., her sister, Betty Robertson of Brighton, ON. and her good friend and care giver, Jane Cole of Medicine Hat. Marg was predeceased by her husband, Eldor in 1993 and her brother, Eric Greaves in 2003. Marg lived in her own home until the age of 97, the last 17 of those years living with her daughter, Deborah and her grandson, Josh Crawford. She was born on January 2, 1916, the eldest of 4 children to Herbert (Medicine Hat’s first postman) and Lily Greaves and lived her entire life in Medicine Hat. Marg married Eldor Freeman on July 13, 1940. Together they enjoyed gardening, camping and raising their nine children. She was a member of the Medicine Hat Public Library all her life and for many years she made her weekly trip via the bus for a shopping bag of books. She was an avid reader with an amazing imagination. As a member of the library and CNIB, she was able to continue enjoying books and magazines after her vision failed. Marg was also a long time member of the Ladies Auxillary of the United Transportation Union. She was a member of the Medicine Hat Horticultural Society and spent many hours working and creating a beautiful garden and yard with Eldor which she continued to enjoy well into her 90’s. Her daughter Deborah continues the tradition. The family would like to thank Riverview Care Centre for the excellent, loving care Mom received over the last two years. A family gathering to celebrate Margaret’s life will be held at a later date. (Condolences may be expressed by visiting www.cooksouthland.com) Those wishing to remember Margaret may do so through a donation to the Medicine Hat Public Library, 414 – 1 Street S.E., Medicine Hat, Alberta, T1A 0A8 or the CNIB, 102, 520 – 2 Street S.E., Medicine Hat, Alberta, T1A 0C6. Honoured to serve the family is