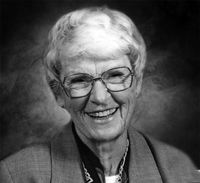 Mary Hargrave passed away peacefully, at Wentworth Manor on Thursday, April 30, 2015 at the age of 93 years.

Mary was born on August 19, 1921, in Edmonton, Alberta, to parents William and Mabel Edwards. She grew up in Calgary, and graduated from Calgary Collegiate Institute in 1939. She was one of three siblings, and is survived by her sister, Florence. Mary and Ralph met at the University of Alberta; she, in Nursing and he, in Engineering. They were married two years after graduation in 1945, in Edmonton. Ralph’s career in general contracting took them many places across Canada and overseas, all the while rearing four children. They settled in Calgary, where Mary continued her nursing career in public health with the City of Calgary eventually retiring in the mid 1980’s. Retirement brought travel, skiing, golfing, and choir music with her beloved West Side Singers. There were also many special family times, treasured by all.

A Memorial Service will be held at 3:00 PM, Monday May 25 2015, at Scarboro United Church, 134 Scarboro Ave SW, Calgary, AB T3C 2H1. Mary’s family wishes to offer special thanks to the exemplary staff, and caregivers at Wentworth Manor for all the kindness they showed. If friends so desire, memorial tributes may be made directly to the Mustard Seed Street Ministry, 102 – 11 Avenue S.E., Calgary, AB T2G 0X5 Telephone: (403)269-1319, www.theseed.ca. Condolences may be forwarded through www.mcinnisandholloway.com.