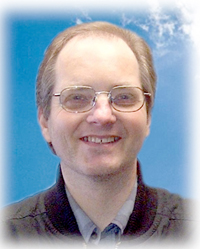 It is with heavy hearts that we, the family of Kelly Todd Clute, announce his passing on Thursday, May 14, 2015, at the age of 47 years. Kelly is survived by his father, Dale; brother, Kevin; sister, Karla; sister by choice, Louise as well as many uncles, aunts, cousins, his longtime best friend, Tim, his closest friend, Conrad as well as many other friends and anyone lucky enough to have met him. He is also survived by his cat, Oreo, who was his companion through everything and had let us know Kelly was ill long before his stubbornness told us. He was predeceased by his mother, Georgia in 2010, his nephew in 2004 as well as his grandparents. Kelly was a man of many talents. In High School, he was known for being artistic – achieving marks of 99% in

drama and art and 100% in graphic design. Another talent was weather… he could forecast better than any weather channel ever could, knowing days in advance when we were going to get an amazing thunderstorm. His current talent was video games. He was a true artist having many hours to perfect his gaming ability when he was home sick and was not able to leave his house. Anyone who ever met Kelly knew he had an infectious personality. His sense of humour, his positive outlook on life and his laugh always left you feeling happier the rest of the day. Kelly was diagnosed with diabetes at the age of 7 years. He battled every day for the last 4 years to just stay with his family. He never complained about being sick or the pain he was in. He was polite and appreciative. He fought his diabetes until the end. It took his kidneys, his kidney transplant and eventually his heart, but it did not take his spirit. “I have learned from this amazing man that I was lucky enough to call my brother, that life is very short… Live, Love and Laugh.” Kelly’s memory will be silently remembered by his family and friends. In lieu of flowers, memorial tributes in Kelly’s honour may be directed to Canadian Diabetes Association, 204, 1865 Dunmore Road S.E., Medicine Hat, Alberta, T1A 1Z8; Kidney Foundation of Canada, 6007 – 1A Street S.W., Calgary, Alberta, T2H 0G5 or to the Heart & Stroke Foundation of Alberta, #124, 430 – 6 Avenue S.E., Medicine Hat, Alberta, T1A 2S8. (Condolences may be expressed by visiting www.cooksouthland.com) Honoured to serve the family is