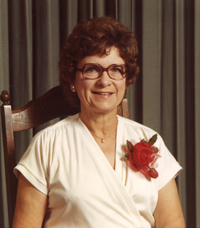 Marjorie Vivian Mayer of Medicine Hat, passed away on Tuesday, May 26th, 2015 at the age of 88 years. Marjorie leaves to cherish her memory her daughter-in-law, Carole Meidinger; three grandchildren, Darren (Michelle) Meidinger, Russell Meidinger and Tara Lynne (Rob) Watkins; four great grandchildren, Mikayla and Joshua Meidinger and Ryan and Ayla Watkins; step-daughter, Arlene Cathcart, together with her family; one step-son, Ron Mayer, together with his family; and two sisters, Audrey (Fritz) Sandau and Valarie Schattle. Marjorie was predeceased by her parents, Michael and Elizabeth Nittle; infant brother, Norman Nittle; husband, Dan Meidinger; two sons, Calvin Meidinger and Glen Meidinger; one daughter, Fern Southward; her sister, Gloria Driscoll; late husband, Harvey Mayer; and two brothers-in-law, Allen Schattle and Jim Driscoll. Marjorie was born on June 30th, 1926 to parents, Michael and Elizabeth Nittle. She was raised on a farm about six miles east of Medicine Hat and attended school in Medicine Hat and Finn’s Lake District School. Marjorie married Dan Meidinger in December 1943. They were blessed with three children, Glen Murray, Calvin James and Fern Elaine. They farmed east of Medicine Hat for a while, then bought a small home on Yuill Street where they raised their children. Marjorie was of the Lutheran faith all her life, and often leaned heavily on God for help and guidance in very difficult times. God always answered by “opening a door” as she put it, so she could get the help needed. In 1984, Marjorie met Harvey Mayer, whom she remembered from early childhood, as Harvey grew up on a farm just a few miles from the Nittle farm. Marjorie and Harvey were married on January 26th, 1985 at St. Paul Lutheran Church. Marjorie served with the L.W.M.L. for 23 years and enjoyed working with the other ladies. She served a term on the Board of Stewardship and enjoyed teaching Vacation Bible School whenever she could. She also filled in as a substitute Sunday school teacher. Also she was the congregational representative for the LAMP Mission for many years. Those wishing to pay their respects may do so at ST. PAUL LUTHERAN CHURCH, 515 Sprague Way SE, on Friday from 10:00 until 10:55 a.m. The Funeral Service will be held at ST. PAUL LUTHERAN CHURCH on Friday, May 29th, 2015 at 11:00 a.m. with Pastor Ken Edel officiating. Interment will follow at Saamis Prairie View Cemetery. Memorial gifts in Marjorie’s memory may be made to Canadian Cancer Society, 102 – 1865 Dunmore Road SE, Medicine Hat, Alberta, T1A 1Z8 or to the Alberta Heart & Stroke Foundation, 124, 430 – 6th Avenue SE, Medicine Hat, Alberta, T1A 2S8. Condolences may be sent through www.saamis.com or to condolences@saamis.com subject heading Marjorie Mayer. Funeral arrangements are entrusted to