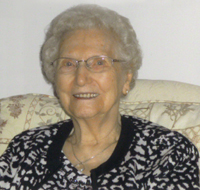 1918 ~ 2015
With great sadness we announce the passing of our loving mother, grandmother and great grandmother on Monday, May 25th, 2015 at St. Joseph’s Hospice at the age of 97 years. Ann was the loving wife of the late John Vandenburg for sixty-two years. She will be lovingly remembered by her two daughters, Grace (Harold) Phillips and Alida (Lemont) Tabor; three grandchildren, John (Clarissa) Phillips, Sandra (Jason) Handley and Troy (Catherine) Hildenbrand; two step- grandchildren, Ryan (Terri) Tabor and Andrea Tabor; seven great-grandchildren; four step-great-grandchildren; one brother-in-law, Gerry Vandenburg; as well as numerous nieces and nephews in Holland and Canada; and long-time friend, Edna Groft. Ann was predeceased by her husband, John in 2003; her parents, Cornelis and Alida De Nooy; two brothers; and three sisters, all of Holland. Ann was born in Hilversum, Holland on April 13th, 1918. This is where Ann met John at a dance studio where John was the assistant instructor. They were married on March 19th, 1941. They taught ballroom dancing for many years in Holland and Canada. In 1958, they made the big move from Bussum, Holland to Medicine Hat with their two daughters. In 1969 they moved to Kitimat, British Columbia for five years, then returned to Medicine Hat. Mom was employed at Black’s Hardware and Gift Store. She was in charge of the china and gifts; she really enjoyed her job. Mom lived for her family, especially her grandchildren and great-grandchildren, who lovingly knew her as Oma. They were all so special to her. Mom loved knitting and crocheting and made many beautiful items for her family and church charities. Mom always looked forward to their trips to Holland to visit family and friends. Ann and John also travelled to many European countries.

Mom, we love you, we miss you.
You will be in our hearts forever.