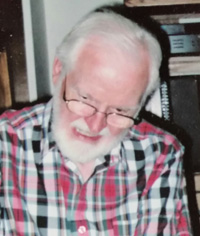 Arthur Jeggo of Medicine Hat, beloved husband of the late Barbara Jeggo, passed away on Tuesday, February 10th, 2015 at the age of 87 years. Arthur leaves to cherish his memory his children, David (Beverley Ann) Jeggo, Michael Jeggo, Katherine (Brooke) Culley and Karen Jeggo; six grandchildren, David Jeggo (Mersija Softic), Chris (Veronique) Jeggo, Melanie (Craig) Weigel, Wednesday Culley, Wyatt Culley and Joshua Jeggo; and three great grandchildren, Zachary, Maya and Noah. Arthur was predeceased by his wife, Barbara; his parents; three brothers, Charles, Robert and Stanley; and two sisters, Gert and Mable. Arthur was born in England and in 1952 moved to Canada, specifically Medicine Hat and fell in love with the prairies. He met and married Barbara Alsop and they had 4 children. He took his family camping every summer for 2 weeks even though he hated it, unbeknownst to the kids. Arthur was a very kind and gentle man who worked hard. He was an avid gardener his entire life and enjoyed painting, collecting stamps and coins. He lost his beloved Barbara nine years ago and coped the best he could by being extremely busy with his hobbies and gardening. Arthur remained in his own home until the time of his passing. He will be dearly missed by all those who knew and loved him. A Memorial Service will be held in the SAAMIS CREEKSIDE CENTRE, #1 Dunmore Road SE, on Saturday, June 6th, 2015 at 11:00 a.m. with Rev. Dr. Dustin Resch officiating. Memorial gifts in Arthur’s memory may be made to A.J.‘s Loan Cupboard, P.O. Box 45006, MacKenzie Drug Post Office, Medicine Hat, AB, T1A 0B1. Condolences may be sent through www.saamis.com or to condolences@saamis.com subject heading Arthur Jeggo. Funeral arrangements are entrusted to