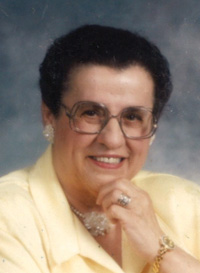 Celestine “Sally” Fischer of Medicine Hat, beloved wife of the late Henry Fischer, passed away on Friday, May 29th, 2015 at the age of 83 years. Sally leaves to cherish her memory her two daughters, Ivy (Marvin) Stahl and Shelley (Richard) Steckmeister, both of Medicine Hat; two granddaughters, Maxine (Jarry) Hegg and Roxanne (Johnathan) Kroeker; three great-grandchildren, Naomi and Linnea Hegg and Bailey Kroeker; one brother, Adam (Katherine) Schafer; as well as numerous nieces and nephews. Sally was predeceased by her husband, Henry on August 3rd, 1995; her parents, Alexander and Matilda Schafer; four brothers, John, Bill, Dan, and Emanuel Schafer; and two sisters, Rosie Reider and Elizabeth Schile. Sally was born in Schuler on March 10th, 1932 and was raised on the family farm east of Schuler. She received her formal education at Green Corn School. Sally married Henry Fischer on November 18th, 1949 at St. Paul Lutheran Church in Medicine Hat. They made their home on the Hager farm until they purchased another farm. It was on this farm that they resided before retiring to Medicine Hat in 1991. Sally enjoyed her home, her church, and coffee at the Dairy Queen and A&W with her friends. She will be sadly missed by all who knew her and will be remembered for her excellent culinary skills, especially her kucha. The family would appreciate their privacy be respected and request no food or flowers be brought to their homes. Those wishing to pay their respects may do so at SAAMIS MEMORIAL FUNERAL CHAPEL, #1 Dunmore Road SE, on Tuesday from 7:00 to 9:00 p.m. and on Wednesday from 7:00 to 9:00 p.m., and at VICTORY LUTHERAN CHURCH, 2793 Southview Drive SE, on Thursday from 12:00 to 12:55 p.m. The Funeral Service will be held at VICTORY LUTHERAN CHURCH on Thursday, June 4th, 2015 at 1:00 p.m. with Reverend Jim Bredesen and Diaconal Minister Lila De Waal co-officiating. A Private Interment will take place at Saamis Prairie View Cemetery. Memorial gifts in Sally’s memory may be made to the Canadian Cancer Society, 102 – 1865 Dunmore Road SE, Medicine Hat, Alberta, T1A 1Z8, or to the Alzheimer’s Society, 547 – 4th Street SE, Medicine Hat, Alberta, T1A 0K7. Condolences may be sent through www.saamis.com or to condolences@saamis.com subject heading Sally Fischer. Funeral arrangements are entrusted to