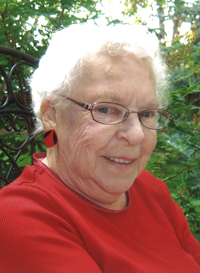 Joyce Elaine Nelson, beloved wife of the late Morris Nelson, passed away peacefully at the Bow Island Health Centre on Wednesday, July 1, 2015 at the age of 89 years.

The Funeral Service will be held at St. Andrew’s United Church, 139 – 2 Avenue West, Bow Island on Tuesday, July 7, 2015 at 2:00 P.M. with Pastor Sheila McLeod officiating. Burial to follow at the Burdett Cemetery. Condolences may be forwarded by visiting our website at www.southlandfuneral.com.

Joyce was born in Medicine Hat on February 23, 1926 to parents Fern and Stella Knibb. Joyce rode horseback three and a half miles to the Morning Star School for nine years, and then took grade ten and eleven in Grassy Lake Chamberlain School. Grade twelve was not taught in Grassy Lake, and her parents could not afford to send her to Taber for grade twelve, so she quit school and went to work. She worked for many families in the area, doing domestic work and cooking for thrashing crews. She worked at the coal weigh scale in Grassy Lake for a year, often walking from her parents farm in deep snow every day. She also worked at a restaurant in Warner, she was never afraid of hard work. On October 17, 1949 she married Morris Nelson and they took up residence on their farm. Joyce was a devoted wife, mother, grandmother, and great grandmother. She was always thrilled to have her grandchildren and great- grandchildren visit and spend time with her, playing marbles, having tea parties, crafting, and playing cards. Family was most important to her. Joyce continued to live on the farm until four years after Morris passed away. She then moved to her little house in Bow Island, and then to Pleasant View Lodge. Joyce was always a happy, positive person, always had a smile for you, and always had a good sense of humor. She has touched the hearts of many, and will be missed by all.

If friends so desire, memorial tributes in Joyce’s name may be made directly to the Burdett Community Cemetery, c/o P.O. Box 19, Burdett, Alberta T0K 0J0.

One Condolence for “JOYCE NELSON”