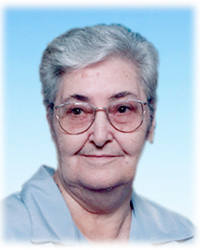 It is with heavy hearts that the family of Katie M. Nelson, beloved wife of the late Walter Nelson, announce her peaceful passing at the Bow Island Health Centre on Tuesday, June 30, 2015, at the age of 91 years. Katie was born in Bow Island, AB., on April 18, 1924 to Walter and Mary Degenstein. She was raised on the family farm near Burdett, AB., and received her education in the Burdett area. Katie married Walter Nelson in Bow Island in 1947. In 1953, they purchased a farm North of Bow Island where they farmed until retiring in 1996. She continued to reside in Bow Island until the time of her passing. Katie will be forever remembered in the hearts of her son, Wayne (Diana) Nelson and their two children, Clinton (Sheena) and Charlene (Chris) as well as Charlene’s daughter, Brooklynn. She is also survived by her sister, Lucille Bennett; half-sister, Agnes Angela Dickinson as well as numerous nieces, nephews, cousins and extended family. Katie was predeceased by her husband, Walter and her parents, Walter and Mary Degenstein. Those wishing to pay their respects may do so at Cook Southland Funeral Chapel, 901 – 13 Street S.W., Medicine Hat on Tuesday, July 7, 2015, between 7:00 p.m. and 8:00 p.m. as well as on Wednesday starting 1 hour prior to the funeral. The Celebration of Katie’s life will be held at Cook Southland Funeral Chapel on Wednesday, July 8, 2015, at 11:00 a.m. with Life Celebrant Gerry Getz officiating. Interment will follow at Prairie View Cemetery with a time of fellowship thereafter in the Cook Southland Reception Facility. (Condolences may be expressed by visiting www.cooksouthland.com) If friends so desire, donations in memory of Katie may be made to the S.P.C.A., 55 Southwest Drive S.W., Medicine Hat, Alberta, T1A 8E8 or to the Alzheimer Society, 401D – 3 Street S.E., Medicine Hat, Alberta, T1A 0G8. Honoured to serve the family is