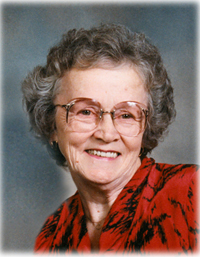 Mrs. Lillian Dee, beloved wife of the late Mr. Fred Dee, passed away peacefully at the Medicine Hat Regional Hospital on Saturday, July 4, 2015, at the age of 87 years. Lillian was born April 24, 1928, in St. Vital, Manitoba. This is where she grew up and attended Holy Cross School. She met and later married Fred Dee in Winnipeg, MB on November 26, 1960. They moved to Medicine Hat where they attended St. Patrick’s Roman Catholic Church. Lillian was employed in various office jobs throughout the years including a position with the Canadian Wheat Board. She enjoyed arts and crafts and had quite a talent for knitting and crocheting. She enjoyed playing cards, bowling, golfing, playing darts and sitting around the fire pit on quiet nights with the love of her life, Fred. Lillian was a dedicated member of the Royal Canadian Legion Ladies Auxiliary for 36 years. She liked to go to the Legion to take in the meat draws and try her luck at the VLT’s. She enjoyed her life and ventured off to Europe with her family and looked forward to visiting family in Winnipeg. Despite her disabilities later in life, she would never let it get her down and we say thank you to the many ladies from home care who would help and care for her. Lillian was a loving wife, caring mother and will be deeply missed by her sons, Fred Jr. of Medicine Hat and James (Lori) of Thunder Bay, ON.; grandson, Kevin of Lumby, B.C.; brother-in-law, Ralph MacLean of Calgary; sister-in-law, Doreen (Paul) Poohachow of Calgary as well as numerous nieces and nephews. Lillian was predeceased by her husband, Fred in November of 2014; parents, Margaret and Joseph Goss; sister, Margaret and brother, Joseph; brothers-in-law, Art Dee and Chuck (Pat) and sister-in-law, Phylis MacLean. Those wishing to pay their respects may do so at Cook Southland Funeral Chapel, 901 – 13 Street S.W., Medicine Hat on Tuesday, July 7, 2015, from 4:30 p.m. to 6:00 p.m. and again beginning one hour prior to service time. The Funeral Service will be held at Cook Southland Funeral Chapel on Wednesday, July 8, 2015, at 3:00 p.m. with Life Celebrant Gerry Getz officiating. Interment will follow at Hillside Cemetery with a luncheon thereafter in the Cook Southland Reception Facility. (Condolences may be expressed by visiting www.cooksouthland.com) Honoured to serve the family is Cook Southland Funeral Chapel, 901 – 13th Street S.W. Medicine Hat, Alberta T1A 4V4 Phone 403-527-6455