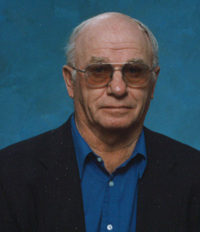 Kasper Aberle of Medicine Hat, beloved husband of Helen Aberle, passed away on Saturday, July 25th, 2015 at the age of 88 years. Kasper leaves to cherish his memory his loving wife of 66 years, Helen; their six children, Shirley (Paul), Dennis (Carol), Edward (Judy), Jerry (Brenda), Ross (Cindy) and Tracy (Ashely); nine grandchildren; two step grandchildren; twelve great grandchildren; three great great grandchildren; as well as numerous nieces and nephews. Kasper was predeceased by his parents; four brothers; and one sister. Dad’s love and life was farming. Even though he was retired he would travel out to the farm and see how the boys were doing and helped whenever he could. About a week before he passed he went out to the farm to see how the crops were doing. A Private Family Funeral Service will be held at SAAMIS MEMORIAL FUNERAL CHAPEL, 1 Dunmore Road S.E., on Wednesday, July 29th, 2015. Memorial gifts in Kasper’s memory may be made to Alberta Heart & Stroke Foundation, 124, 430 – 6th Avenue SE, Medicine Hat, Alberta, T1A 2S8. Condolences may be sent through www.saamis.com or to condolences@saamis.com subject heading Kasper Aberle. Funeral arrangements are entrusted to