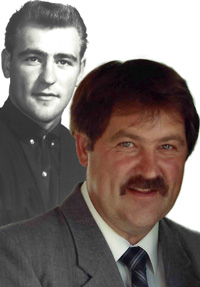 After saying goodbye to his sons and grandchildren, Gerald Lloyd Boschee, 69, of Medicine Hat, Alberta, passed away peacefully in hospital on the evening of August 2, 2015, in the loving company of his wife, Peggy. In the months of his illness he looked forward to going ‘home’ to see his Grandma Sauter. He was also predeceased by his mother, Erna (nee Sauter); dad, Art Boschee and sister, Shirley Tkachyk. Among those left to fondly remember him are his wife, Peggy; sons, Mark (Jana) Boschee and Todd (Tammy) Boschee; stepsons, John (Sandy) Sackman and Tim (Delayne) Sackman and his grandchildren, Jessica, Taelynn, Taryn, Elise, Dakota, and Sacha. Gerald was born on June 30, 1946, in Medicine Hat, Alberta. He had varied work endeavors including working at his dad’s Massey dealership, working at Martin Bros. Funeral Home in Lethbridge, farming in Warner, owning and operating several businesses including a gas station and car lot in Warner, and a bakery with son, Todd. The longest and most loved part of his career was as a car salesman for over 40 years and especially as co-owner of Autos-R-Less. He truly enjoyed sitting and talking with friends and customers at the car lot; it’s what kept him going to work every day, six days a week, right to the end. Gerald (AKA “Bad-Shot Boschee”) enjoyed hunting pheasant and deer on the family homestead near Elkwater. He was also an avid trap shooter, bringing home many a trophy. Gerald volunteered his time as a member of the Warner Elks Club, Warner Volunteer Fire Department, and Medicine Hat Hockey Hounds. He also coached his boys’ hockey teams, which always won the ‘Best- Behaved’ and ‘Cleanest Dressing Room’ awards. Gerald was very proud of his children and grandkids, bragging about them every chance he had. He loved talking with his grandchildren, eager to hear about all their accomplishments . . . and boyfriends. Gerald loved good food, good friends, and good times, including yearly trips to Mexico with Peggy and their many great friends. His family will miss his good-natured teasing, laughter and just a bit of complaining at holiday gatherings. The funeral service will be held at Holy Family Parish, 1451 Strachan Rd S.E., Medicine Hat, on Saturday, August 8, 2015, at 11:00 a.m. with Reverend Barrett Scheske officiating. As a kid at heart and a loving grandpa, online memorial donations may be made in Gerald’s name to Alberta Children’s Hospital, www.childrenshospital.ab.ca, or by mail to Alberta Children’s Hospital Foundation, 2888 Shaganappi Trail N.W., Calgary, Alberta, T3B 6A9. (Condolences may be expressed by visiting www.cooksouthland.com) Honoured to serve the family is