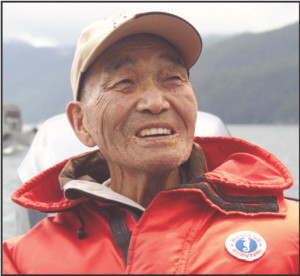 Saburo Nishi, beloved husband of Kimino Nishi, passed away in his sleep, at home on his Bow Island area farm, on Thursday, August 13, 2015 at the age of 88 years.

The Burial Service will be held at the Bow Island Cemetery on Wednesday, August 19, 2015 at 3:00 P.M. A reception will follow at the Golden Age Club, 206 – 5 Avenue East, Bow Island. Condolences may be forwarded by visiting our website at www.southlandfuneral.com.

Saburo was born on November 8, 1926 in Takeda-Kami, Kaseda City, Kagoshima, Japan. He was the third son to Taichiro and Eda Nishi. Saburo immigrated to Canada in 1937, with his seventeen year old brother Hideo. They boarded a steamship in Yokohama and arrived ten days later in Victoria, British Columbia and joined family on their berry farm in the Hatzic area east of Mission, British Columbia. Saburo attended Ferndale Elementary School, Hatzic Public School and Mission Junior High School, where he tried to stay out of trouble with the local Nisei (second generation Japanese Canadian) boys who labelled him an “FOB” (fresh off the boat) immigrant. With the outbreak of the Pacific War and subsequent evacuation, the Nishi family (as were all Japanese Canadians living in Mission) were moved to Southern Alberta in the spring of 1942. The Nishi family left the berry farm, a half tonne truck and a horse named Prince and boarded a train at the Mission Station. They travelled under Mountie guard and arrived in Lethbridge with the baggage restriction of two suitcases per person whereupon they were assigned as sugar beet laborers to the D.E. Quist Farm in Shaughnessy. It was an inauspicious beginning for life in Southern Alberta where they started with few possessions and little money. Despite the gruelling ‘widow-maker’ work of forking harvested sugar beets on to trucks, the Nishi brothers managed to survive the harsh conditions and eventually started farms of their own.

Saburo moved to the Bow Island area in 1960 and Kimino joined him in 1961. Saburo and Kimino enjoyed life as successful bean farmers, although Sub was a potato growing ‘king’ at heart. Echoing the sentiments of Scarlett O’Hara in ‘Gone With the Wind’, Sub liked to articulate… “I have a tremendous affinity for the land, which is ultimately what sustains life.” Sub enjoyed fishing and hunting and in his retirement he preferred travelling by bus or ‘chauffeured’ vehicle over air travel, watching local news and NHK Japan on satellite TV, reading ‘hot, juicy novels’ by James A. Mitchener and socializing with family and friends, acquaintances and any friendly passers by whom he would often engage in conversation.

No Koden or flowers by request. If friends so desire, memorial tributes in Saburo’s name may be made directly to the Bow Island Health Centre, Bag 3990, Bow Island, Alberta T0K 0G0 or to the Buddhist Temple of Southern Alberta, 470 – 40 Street South, Lethbridge, Alberta T1J 3Z5.

One Condolence for “SUB NISHI”