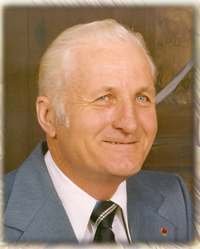 Mr. Michael “Mike” Kasper Dietrich, beloved husband of Mrs. Josephine Bertha Dietrich, passed away at the Medicine Hat Regional Hospital on Thursday, September 3, 2015, at the age of 96 years. Mike was born and raised on the family homestead Southwest of Mendham and attended Keynote School. He was drafted into the Canadian forces in 1939 and discharged in 1944. Mike was part of the Canadian Army Signal Corps stationed on the west coast of B.C. After the war, he did some logging in B.C. later returning to Saskatchewan to farm with his brothers, Basil and Steve until 1961. After 1961, the brothers decided to farm separately with their individual growing families. Mike married Katherine Hubert in 1948 in a double wedding with his older sister, Katherine and Katherine Hubert’s brother, Joe. It was with great sadness, he had to say goodbye to his first wife Katherine in 1951. Mike remarried on November 11, 1953 to Josephine Zunti, and they spent almost 63 years together until Mike’s passing. He was an active member and volunteer for his local Roman Catholic Parishes; St. Anthony’s (Mendham, SK) Little Flower (Leader, SK.), Christ the King and St Patrick’s (both of Medicine Hat). Mike was a founding member of the Little Flower (Leader, SK), Knights of Columbus and spent many hours providing volunteer labor for his parish including rectory construction, installation of floor coverings, cabinet construction and fabricating kneelers, some of which were constructed without using any power tools. He loved farming and the fragrance of the newly turned soil. His greatest joy was to see the grain “pouring” into the combine hopper in harvest. Even though he was very weak this past week, he still had to “squeeze” to feel how “full” the durum head was from a sample of this year’s crop. Mike was independent, honest and very hard working. Although he “officially” retired from farming in 1984, he continued to help out once in a while on the farm until 2006. His independence remained with him even until his passing as he often said he did not wish to be a burden on anyone. Mike was very committed to his faith regularly attending church services either in person or by television. He enjoyed working with his hands, especially working with wood as this was his special hobby. Mike built many cupboards for his own home (some without power tools) and for others, and a desk for each of his sons. His favorite wood to work with was oak, a wood that was as strong as he was. Mike enjoyed his grandchildren, watching them grow up. They will remember him for the blowing on their cheeks. He loved playing cards, particularly a game called “Rookie” and visiting. Mike found it very hard when his hearing was failing and he could no longer hear people who were speaking to him. When Mike was an adolescent he enjoyed playing softball and often told of how they would walk two miles to the neighboring school, play two games of ball and walk home after. He enjoyed watching baseball and hockey, and was often involved with management of some of his son’s hockey teams including being a volunteer driver for the local senior hockey team. Mike and Josephine enjoyed travelling having made trips to Australia, Alaska, Panama Canal, the Far East and Europe. He is lovingly survived by his wife, Josephine (nee Zunti); son, Charles (Laverne nee Luterbach) and their children, Kent (Annie), Michael (Robyn) and their children, Keelan, Graham and Wesley; son, Thomas (Jane nee Boehmer) and their children, Angela (Lance) and their children, Noah, Elyse and Sam; Candice; Kristen (Walter) and their children, Olivia and Chloe, Nicholas (Kelly) and their children, Shiloh and Azia; Andrew and friend Evelyn; brother, Steve (Anna nee Kuntz); brothers-in-law, Walter Zunti (Elsie nee Greter), Frank Zunti (Agnes nee Lukan); sisters-in-law, Dorothy (Marcel) Lukan and Aline Zunti (nee Rousseau) as well as numerous nieces and nephews. Mike was predeceased by his parents, Adam and Magdalena (nee Schanz) Dietrich; his first wife, Katherine (nee Hubert); his sisters, Barbara Schell, Katherine (Joe) Hubert and Eleanor (Mike) Hubert; brother, Basil (Margret nee Hubert); in-laws, Sr. Salesia (nee Alice Zunti); Joe (Louise nee Zunti) Zimmer, Casper (Mary nee Dietrich) Zunti, Marcel (Clara nee Zunti) Croteau, Hilda Zunti; nephew, Frank Dietrich and niece, Mary Williams (nee Dietrich). Those wishing to pay their respects may do so starting one hour prior to Vigil Prayers which will be recited at Cook Southland Funeral Chapel, 901 – 13 Street S.W., Medicine Hat on Monday, September 7, 2015, at 7:00 p.m. The Funeral Mass will be celebrated at St. Patrick’s Roman Catholic Church, 238 – 2 Avenue N.E., Medicine Hat, on Tuesday, September 8, 2015, at 10:30 a.m., with Reverend Father Francis Tran Celebrant. Interment will take place at Hillside Cemetery and a luncheon will follow in the hall of St. Patrick’s Catholic Church. (Condolences may be expressed by visiting www.cooksouthland.com) Memorial donations in Mike’s name may be made to a charity of one’s choice. Honoured to serve the family is