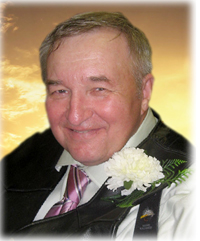 The beloved Nick Chernezky of Redcliff Alberta passed away on Thursday, September 3, 2015, at the age of 62 years. Nick was born in Coaldale, Alberta on February 12, 1953 residing in various locations including Coaldale, Banff, Calgary and Milk River receiving most of his schooling in Coaldale and Milk River. On May 25, 1991, he married Geri Nicole Hildebrand in Bow Island, Alberta and together they raised his four children and farmed in the area for many years. He was very content with Geri at his side. Prior to farming, Nick worked on ranches and he was also a rodeo clown which he loved; he worked with the Department of Highways, Elision’s and then for 17 years as a grain buyer for Alberta Wheat Pool. He loved his job as a grain buyer and people loved him where ever he went. At the Legend Alberta Wheat Pool, Nick became a legend by surpassing its handling capacity beyond what the company thought ever possible. He is remembered as being very happy to be the sole elevator operator wherever that took him. He worked or relieved staff at Alberta Wheat Pools all across southern Alberta from Irvine to Cardston and many points in between always fishing wherever he went. As the oldest child, Nick became a father figure for his brothers. He loved to fish with his grandpa and also took his brothers and his friends and then his own children fishing. He looked forward going to Yack to be a ‘lumber jack’ with his friends, George and Judy Dickson also camping and fishing there. As he became sicker, he retired from farming. Being an innovator and artist Nick now spent a lot of time woodworking and was always thinking what he could make especially for his grandkids. Those who knew Nick also knew that he always had an opinion and stuck to it. He clowned around and loved to make people laugh. He’d say things like “he was finer than frogs’ hair” or he’d ask you if you were “still hanging in there?” He was called the “Crazy Ukrainian and loved life.” It was said that, “he was the life of any party” without drinking, whereas most people would drink and then could become the life of the party. Despite many setbacks, he always remained positive and loved being a Dad and Papa with a constant focus on keeping his family together. He was very delighted with each child and grandchild, always wanting to spend time with them. He will be deeply missed by his wife Geri Nicole; mother, Anna; children, Robert (Angie) Chernezky; Staci Chernezky and her son, Kelton; Ryan (Clara) Chernezky and their children, Taryn, Mason and Keely; son-in-law, Paul Coon and his daughter, Jaydalyn; siblings, Ed Chernezky, Tony Siwalowski, Steven Siwalowski, Tina Sedgwick, Annette Orosz and Jim Orosz as well as numerous nieces and nephews. He is also survived by an aunt, Emily Jones; friend, Dr. Larry Hoogeveen, who changed Nick’s life as he showed him the way to a personal relationship with the Lord Jesus Christ and so gave him hope for the now and past the grave into eternity; and friends, Frank and Marion Ruppert and Rick and Lori Dykstra. Nick was predeceased by his father, Walter Chernezky; daughter, Nicole Chernezky Coon; Aunt, Tina Warr; grandparents, Pauline and Demitri Chernezky and Peter and Elizabeth Avramenko, mother-in-law, Ellen Hildebrand; previous father and mother-in-law, Fritz and Francis Mueller; and a good friend George Dickson. Many thanks to so many people who made a difference in Nick’s life by their kindly ways and help since he retired including everybody at the Redcliff Home Hardware and the numerous Doctors, medical and home care personal. A Memorial Service will be held at Heights Baptist Church, 1250 Division Ave. S., Medicine Hat on Thursday, September 10, 2015, at 2:00 p.m. (Condolences may be expressed by visiting our website at www.cook southland.com) In lieu of flowers, memorial donations in Nick’s name may be made directly to the Gideons International, c/o Mr. Melvin Mogck, 177, 1415 – 28 Street S.E., Medicine Hat, AB. T1A 8P9. Honoured to serve the family is