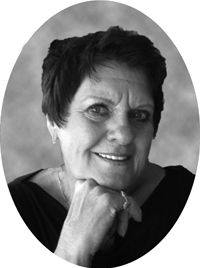 Judy passed away on Thursday, September 17 at South Health Campus in Calgary. She is survived by her only child, Wendy (Paul) Rubner; grandchildren Hailey and Amanda; beloved companion Robert Clermont; brothers Curtis (Vera) Winkler and Larry Winkler; sisters Diane Strafford and Shirley Bunting; and a great number of nieces and nephews. Judy was a prominent businesswoman in Strathmore for 30 years and owned Golden West Jewelry. A memorial service will be held on Friday, September 25, 2015 at Lord of All Lutheran Church at 11:00 a.m. To send condolences, please visit Judy’s obituary at www.wheatlandfuneralhome.ca.