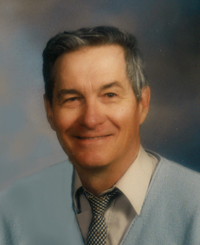 Fred grew up in Empress as well as Estuary, Saskatchewan. He began his education at a rural school, Chesterfield, five miles from the family farm. After completing high school, he took a six-week Emergency Training course and began teaching in 1956. Over the next years, he completed a Bachelor of Education at the University of Alberta. He also received a Senior Certificate in Industrial Arts, which became the focus of a 19-year career in teaching. He then built and managed the Olympic Motel in Oyen. After moving to Medicine Hat, he renovated a number of apartments, built his own house, and renovated and managed the Forksview Motel in Empress.

The Funeral Service will be held at SAAMIS MEMORIAL FUNERAL CHAPEL, 1 Dunmore Road SE, on Thursday, October 8th, 2015 at 11:00 a.m. with Gary W. Goran officiating. Interment will take place following the reception at Empress Cemetery. Memorial gifts in Fred’s memory may be made to the CNIB, 102, 520 – 2nd Street SE, Medicine Hat, Alberta, T1A 0C6. Condolences may be sent through www.saamis.com or to condolences@saamis.com subject heading Fred Foster. Funeral arrangements are entrusted to