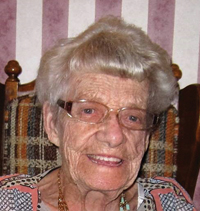 Anne Deren, beloved wife of the late Walter Deren, passed away on Wednesday, October 7th, 2015 at the age of 92 years at the Colonel Belcher Centre in Calgary. Anne leaves to cherish her memory three children, Gary (Dalyce), Marlene (Ron), and Darlene (Hans- Dieter), all of Calgary; grandchildren, Landon, Laura (Tavish), Nicole (Mike), Amanda and Evan; brother, Jack Rexius; sisters-in-law, Bev Rexius and Viola Rexius; family pets, Sparky and Braxton; as well as numerous nieces, nephews, and cousins. Anne was predeceased by her parents, Jacob and Susanna Rexius; brothers, Henry and Dan Rexius; and sisters, Molly (Pete) Gnam and Mary (Emil) Schneider. Anne was born in Estuary, Saskatchewan on September 13th, 1923 and attended school in the Estuary area. She later joined the Armed Services and served overseas during World War II. After the war, Anne returned home to the prairies and worked in Medicine Hat as well as Redcliff. Anne also travelled through the Okanagan to Vancouver to work and this is where she met her future husband, Walter. Anne and Walter married in Medicine Hat in 1951 and honeymooned in Niagara Falls. They then made their home in Niagara Falls and their children, Gary, and twins, Marlene and Darlene, were born there. In 1960, Walter and Anne relocated their family to Medicine Hat and shortly after, Anne began her career at Defense Research Establishment Suffield and moved to Ralston, Alberta and eventually Suffield, Alberta. After retirement, Anne and Walter moved back to Medicine Hat and they enjoyed their retirement years travelling and attending numerous special events of their grandchildren. They lived at the Wellington Retirement Residence for several years and after Walter’s passing Anne continued to live at the Wellington until August of 2014 when she moved to Calgary. Anne lived a long life and even though she was plagued with numerous health issues, she was always very interested in the activities of her children and grandchildren. Anne will forever be remembered by her children, grandchildren, relatives, and friends. The Funeral Service for Anne will be held on Saturday, October 24th, 2015 at 1:00 p.m. at SAAMIS MEMORIAL FUNERAL CHAPEL, #1 Dunmore Road SE, with Gary W. Goran officiating. The officers and members of the Royal Canadian Legion, Redcliff Branch #6, will conduct a Poppy Service for their departed comrade. As an expression of sympathy those wishing to remember Anne may do so with a gift to The Lung Association, Alberta and NWT, Box 4500 Station South, Edmonton, Alberta, T6E 6K2. Expressions of sympathy may be sent through www.saamis.com or to condolences@saamis.com subject heading Anne Deren. Funeral arrangements are entrusted to