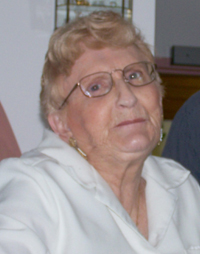 ELLEEN CHRISTINA FERGUSON EDEN, a faithful member of the Church of Jesus Christ of Latter-day Saints, passed away November 2, 2015 to be reunited with her Heavenly Father and loved ones.

Elleen was born in Magrath, Alberta on June 4, 1933 and spent much of her youth there, in Medicine Hat, and in Calgary where she trained as a Nurse’s Assistant. Married in 1953 to Frank Eden, she is predeceased by two children, Bryan and Terry Lynn. Elleen is survived by her son Bob (Natasha) Eden and daughter Sherry (Gary) Moody as well as her grandchildren David, Bryan, Jared, Matthew, Natasha Serena and Niki Eden, Peter Hanus and Chad (Anais), Chelsea, Ashley, and Courtney Moody and her great-granddaughter Tayzie Moody.

The Funeral Service will be held at The Church of Jesus Christ of Latter-day Saints, MAGRATH STAKE CENTER at (21 East 1st Avenue) on Monday, November 9th, 2015 at 2:00 p.m. Friends may meet the family at the church from 1:00 to 1:45 pm prior to the service. Interment to follow in the Magrath Cemetery.

She has been very blessed to have so many nieces and nephews who have showered her with love and acts of kindness. Our family is so appreciative of the extraordinary care from the staff and friends at Diamond Willow Lodge in Magrath where Elleen was surrounded by loving caregivers who she saw as her dear friends.