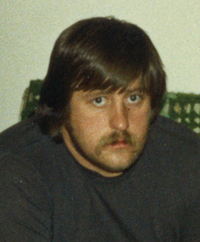 Keith John Daniels, beloved husband of Vallerie “Vall” Daniels of Medicine Hat, passed away on Tuesday, December 1st, 2015 at the age of 57 years. Keith also leaves to cherish his memory one son, Ryan Daniels; one daughter, Renee Daniels; two grandchildren, Mark and Nathaniel; two brothers, Mark (Jo) and Wayne (Rachel); three sisters, Bev (Colin) Smith, Gill (Martin) Harford and Kim (John) Bradbury; several cousins, including Anita Keen; as well as numerous nieces and nephews. Keith was predeceased by his parents, Raymond and Maureen Daniels. Keith was born in England on December 10th, 1957. He married Vall Popel in Medicine Hat on May 26th, 1980. Keith was a member of the British Military in the Vehicle Specs T-cards and the Royal Army Ordnance Corps and worked at BATUS Suffield. He was a great lover of music and all sports, especially the Aston Villa Football Club. Family and friends meant everything to Keith and he loved to joke and poke fun. His favourite quote was “upstairs for thinking, downstairs for dancing”. A Private Family Time of Remembrance will be held. In lieu of flowers, memorial gifts in Keith’s memory may be made to the Alberta Children’s Hospital, Pediatric Burns Unit, 2888 Shaganappi Trail NW, Calgary, Alberta, Canada T3B 6A8 or to the Kidney Foundation of Canada, 6007 – 1A Street SW, Calgary, AB, T2H 0G5 or to the Canadian Diabetes Association, Medicine Hat & District Branch, 102, 73 – 7th Street SE, Medicine Hat, Alberta, T1A 1J2 or to the Alberta Heart & Stroke Foundation, 124, 430 – 6th Avenue SE, Medicine Hat, Alberta, T1A 2S8 or to the A.J.‘s Loan Cupboard, P.O. Box 45006, MacKenzie Drug Post Office, Medicine Hat, AB, T1A 0B1. Condolences may be sent through www.saamis.com or to condolences@saamis.com subject heading Keith Daniels. Funeral arrangements are entrusted to