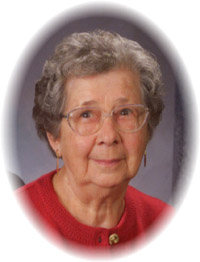 Barbara Schafer of Medicine Hat, beloved wife of the late Alexander Schafer, passed away on Thursday, December 3rd, 2015 at the age of 96 years. Barbara leaves to cherish her memory her son, Wilfred Wayne and daughter-in-law, Trudy Schafer of Medicine Hat; two grandchildren, Curtis (Henrietta) Schafer of Kitchener, Ontario and Tracey (Craig) Parker of Calgary, Alberta; three great-grandchildren, Justus Schafer and Samuel Schafer of Kitchener and Shelby (Ken) Joyner of Texas; three sisters-in-law, Rose Scott, Elva Bertsch and Ramona Bertsch; as well as numerous nieces and nephews. Barbara was predeceased by her parents, Otto and Emma (nee Neuhardt) Bertsch; her brothers, Elmer, Wilbert and Clifford Bertsch; and one sister, Wilma Nason. Barbara was the first born child of Otto and Emma Bertsch in Buffalo Head (Horsham), Saskatchewan on April 27th, 1919. She met Alexander Schafer and they were married on March 12th, 1941. They celebrated 67 years of marriage in 2008. Barbara was a wonderful homemaker and gardener and was a member of the Lutheran Ladies Aid of St. Paul Lutheran Church for over 50 years. She loved spending time with her family, especially her grandchildren and great-grandchildren. Next to her Lord and Saviour, family was everything. She will be sadly missed but lovingly remembered. The family would like to send a special thank you to the staff at the Riverview Care Centre for their exceptional and compassionate care shown to Barbara while a resident. Those wishing to pay their respects may do so at SAAMIS MEMORIAL FUNERAL CHAPEL, 1 Dunmore Road SE, on Tuesday from 7:00 until 9:00 p.m. and at ST. PAUL LUTHERAN CHURCH, 515 Sprague Way SE, on Wednesday from 10:00 until 10:55 a.m. The Funeral Service will be held at ST. PAUL LUTHERAN CHURCH on Wednesday, December 9th, 2015 at 11:00 a.m. with Pastor Ken Edel officiating. Interment will follow in the family plot at Hillside Cemetery. Memorial gifts in Barbara’s memory may be made to St. Paul Lutheran Church Memorial Fund, 515 Sprague Way SE, Medicine Hat, Alberta, T1B 4A7 or to the Lutheran Hour Ministries, 660 Mason Ridge Center Drive, St. Louis, MO 63141. Condolences may be sent through www.saamis.com or to condolences@saamis.com subject heading Barbara Schafer. Funeral arrangements are entrusted to