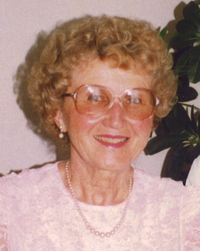 Agnes Solverson passed away peacefully at the Father Lacombe Care Centre in Calgary on Tuesday, December 8th, 2015 at the age of 91 years. Agnes leaves to cherish her memory one son, Larry (Janet) Solverson of Okotoks; two grandsons, Craig (Lydia) and Kevin, both of Calgary; two sisters, Mary Dell of Medicine Hat; and Velma (Tom) Impey of Breton; one brother, Joe Stenger of Medicine Hat; and sister-in-law, Peggy Stenger of Victoria; as well as numerous nieces and nephews. Agnes was predeceased by her husband, Hubert; and brother, Alex.

Agnes was born on January 24th, 1924 in Hungary and immigrated to Canada with her parents when she was five years old. She grew up on a farm near Empress, Alberta. After attending Normal School, she started her teaching career in southern Saskatchewan where she met her husband, Hubert and they were married on November 17th, 1945. After their marriage, she continued teaching until they settled in Smiley, Saskatchewan. She and Hubert retired to Medicine Hat. She will be missed by all who knew and loved her.

The Funeral Service will be held at SAAMIS MEMORIAL FUNERAL CHAPEL, #1 Dunmore Road SE, on Friday, December 11th, 2015 at 2:00 p.m. with Father Philip Le officiating. The interment will take place in the Roman Catholic Section at Hillside Cemetery. Memorial gifts in Agnes’ memory may be made to the Juvenile Diabetes Research Foundation, 3rd Floor, 1725 – 10th Avenue SW, Calgary, Alberta, T3C 0K1. Condolences may be sent through www.saamis.com or to condolences@saamis.com subject heading Agnes Solverson. Funeral arrangements are entrusted to