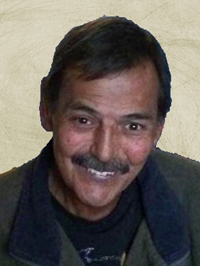 James “Jim” Andrew Kennedy Jr., best friend and companion of Barbara of Medicine Hat, passed away on Monday, December 14th, 2015 at the age of 55 years. Jim also leaves to cherish his memory his children, Tim (Jessie) and Amber (Mike) and family; his father, James Andrew Kennedy Sr.; one grandson, Sawyer; six brothers, Charles, Joseph, Michael, Christopher, Sheldon (Marina) and Lorne; one sister, Michelle; one brother-in-law, Chuck (Sheryl); as well as numerous nieces and nephews. Jim was predeceased by his mother, Doris Irene Kennedy; two sisters, Cindy and Sharyl; one brother-in-law, Keith; and his step-mother, Carol. Jim was born on July 27th, 1960 in Calgary, Alberta. He was an avid fisherman, a family man and enjoyed walking. Jim was an Alberta Champion Snooker player. He loved spending time with his family and friends and will be greatly missed by them. Those wishing to pay their respects may do so at SAAMIS MEMORIAL FUNERAL CHAPEL, #1 Dunmore Road SE, on Sunday from 8:00 to 9:00 p.m. and from 12:30 to 1:25 p.m. The Funeral Service will be held at SAAMIS MEMORIAL FUNERAL CHAPEL on Monday, December 21st, 2015 at 1:30 p.m. with Dr. David J. Carter officiating. A Private Interment will follow at Hillside Cemetery. Memorial gifts in Jim’s memory may be made to the Alberta Children’s Hospital, 2888 Shaganappi Trail NW, Calgary, Alberta, T3B 6A8. Condolences may be sent through www.saamis.com or to condolences@saamis.com subject heading Jim Kennedy. Funeral arrangements are entrusted to