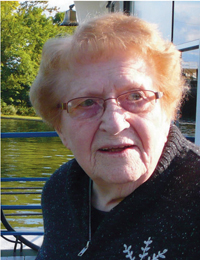 Florence (Ginter) Spier passed away peacefully in Cobourg, Ontario at the age of 94. She was born in Edmonton on December 13, 1920, the daughter of the late Emilie and August Ginter of Camrose. She grew up in the Daysland area and operated a beauty salon there for a number of years before marrying John (Jack) Spier in 1947. They lived briefly in Carstairs and Calgary before moving to Medicine Hat in the mid-fifties. Florence worked as a hairdresser and Jack worked as an electrician with Goodyear Tire Co. She was a member of the Medicine Hat Business and Professional Women’s Group for a number of years and in the 1940’s, lobbied the provincial government to pass a law requiring mandatory licensing for all Alberta hairdressers. Over the years she energetically campaigned for a number of candidates in both federal and provincial elections. Florence was predeceased by her husband Jack and her brothers Art and Irvin. Florence moved to Cobourg in 1998, to be closer to her daughters Carol and Shari. She remained young at heart and was always eager to try new things. She enjoyed travelling… making trips to China and Europe during her retirement. She also loved to spend time with her daughters and their families and her many grand-dogs. They often had trouble keeping up with her! In lieu of flowers, a memorial donation may be made to a charity of your choice. Condolences may be left at the online guestbook at www.MacCoubrey.com