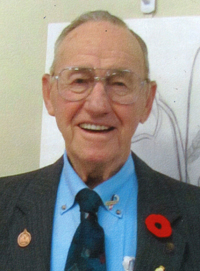 L. J. “Bill” Palmer, beloved husband of Olive “Irene” Palmer of Medicine Hat, passed away on Thursday, December 31st, 2015 at the age of 89 years. Bill also leaves to cherish his memory his five children, Jim (Shirley) Palmer, Cam (Brenda) Palmer, Brent Palmer (Darlene Byrne), Tracy Palmer and Nancy (Glen) Dalgleish; also daughter-in-law, Glenda Newton; twelve grandchildren; twelve great grandchildren; one great great grandchild; one brother, Len (Ina) Palmer; as well as numerous nieces and nephews. Bill was predeceased by his parents, Percy and Emily Palmer; one brother, Jack; and one sister, Elsie. Bill was born on April 23rd, 1926 at Grandview, Manitoba where he was raised and educated. He joined the Canadian Army and received his discharge in 1946. Bill met Irene and they were dating prior to Bill enlisting in WW II and they were married on October 29th, 1947 in Dauphin, Manitoba. Together they settled in Thunder Bay, Ontario, before moving to Grandview and Solsgirth, Manitoba for a short time before Bill’s career with Pioneer Grain took them to several towns in Saskatchewan including, Feudal, Forgan, Saskatoon, Assiniboia and Yorkton. They then returned to Grandview in 1978 where they farmed until 1989, when they moved to Chilliwack, British Columbia. In 1994, Bill and Irene moved to Medicine Hat, where they have resided since. Bill enjoyed hunting, fishing, carpentry, cards and loved the company of family and friends. His memory will be forever cherished by all those who knew and loved him. The Funeral Service will be held at SAAMIS MEMORIAL FUNERAL CHAPEL, 1 Dunmore Road SE, on Wednesday, January 6th, 2016 at 1:30 p.m. with Gary W. Goran officiating. Memorial gifts in Bill’s memory may be made to Margery E. Yuill Cancer Centre c/o Medicine Hat & District Health Foundation, 666 – 5th Street SW, Medicine Hat, AB T1A 4H6 or to the Alzheimer Society, 201, 770 – 6th Street SW, Medicine Hat, AB T1A 4J6. Condolences may be sent through www.saamis.com or to condolences@saamis.com subject heading Bill Palmer. Funeral arrangements are entrusted to