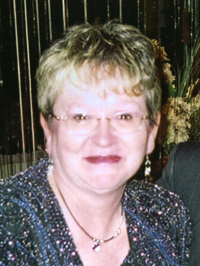 Wendy Judith Lehman, beloved wife of Lorne Lehman of Medicine Hat, passed away on Monday, December 28th, 2015 at the age of 61 years. Wendy also leaves to cherish her memory two sons, Michael (Kara) Moore and Jason Leismeister; one step-daughter, Amber (Keith) Bates; four grandchildren, Kennedy Moore, Dre Leismeister, and Jordan and Justin Bates; her mother, June Moore; one brother, Barry Moore; one brother-in-law, Sherwin (Linda) Lehman; two sisters-in-law, Sheryl (Bob) Bartlett and Lana (Michael) Nikiel; her mother-in-law, Hertha Lehman; as well as numerous cousins. Wendy was predeceased by her father, Dean Moore; and her father-in-law, Elmer Lehman. A Private Graveside Service will be held at Saamis Prairie View Cemetery. Family and friends are invited to a come and go luncheon at the Saamis Creekside Centre on Saturday, January 9th, 2015 from 2:00 to 4:00 p.m. Memorial gifts in Wendy’s memory may be made to Riverview Care Centre, 603 Prospect Drive SW, Medicine Hat, Alberta, T1A 4C2. Condolences may be sent through www.saamis.com or to condolences@saamis.com subject heading Wendy Lehman. Funeral arrangements are entrusted to