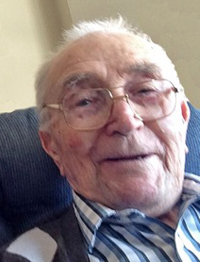 Henry (George) Kusler of Medicine Hat, beloved husband of the late Marjorie Kusler, passed away on Tuesday, January 5, 2016, at the age of 96 years. George leaves to cherish his memory two children, Darcy (Micky) Kusler and their children, Kit and Ann of Maple Creek and Karen (Chris) Young of Medicine Hat; one brother, Ben and sisters, Ruth Krausz and Frances Morley as well as numerous nieces and nephews. George was predeceased by his wife, Marjorie, brothers, Eugene and Art and his youngest daughter, Deborah Kusler. George was born south of Walsh, Alberta on November 10, 1919, to Caroline and Henry Kusler. He married Marjorie (Johnston) in Moose Jaw on October 1, 1949, and they began their life together on a farm in the Graburn area. George loved the land, both farming and ranching. In 1967, they bought the Naismith Ranch in the Cypress Hills and knew they had a “little piece of heaven”. Travels throughout the US and as far away as Australia and New Zealand focused on touring farms and ranches and looking for ideas to improve their operation. George will be remembered for his dedication and the love for his family, his easy going and gentle demeanor and his winning ways at rummy and bingo! A private memorial will be held at a later date. If friends so desire, memorial donations in George’s name may be made to the charity of one’s choice. (Condolences may be expressed by visiting our website at www.cooksouthland.com) Honoured to serve the family is