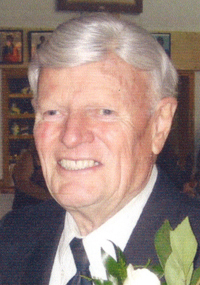 Jack (John) Porter Harmon of Bow Island, beloved husband of the late Eileen Harmon, passed away on Wednesday, January 13th, 2016 at the age of 89 years. Jack leaves to cherish his memory one son, Gary (Cecelia) Harmon of Lethbridge; three daughters, Judi (Ken) Solberg of Bow Island, Carol (Ron) Wutzke and Joy (Blaine) Kisinger, both of Medicine Hat; 16 grandchildren; 33 great grandchildren; 2 great great grandchildren; and one son-in-law, Clarence Gilbertson. Jack was predeceased by his wife, Eileen; his parents, Evan and Grace Harmon; one son, Ellery Harmon; and one daughter, Evelyn Gilbertson. Jack was born on November 1st, 1926 in Sedgewick, Alberta. He married Eileen Anna Hollingsworth on November 12th, 1947. Together they moved to the Gas Camp, north of Bow Island on the South Saskatchewan River. Here they raised six children. Jack was active in the local Mason’s chapter and later with the Medicine Hat Shriners. He retired from Canadian Western Natural Gas in 1982, where he worked as a Gas Plant Operator for 36 years. In 1970, Jack and Eileen moved to Bow Island and opened Harmon’s Super Save which eventually became home to Sears and Greyhound. Locals found the store a comfortable, friendly place to meet, visit and have coffee. Jack had a zest for learning and took many courses at SAIT, Medicine Hat College and correspondence courses. He received many certifications, such as refrigeration and journeyman heavy duty mechanic. Jack loved to visit and tell stories. He also wrote many short stories, poems and prayers and loved to share these with everyone. A Memorial Service will be held at the BOW ISLAND EVANGELICAL FREE CHURCH, 214 – 4th Avenue West on Friday, January 22nd, 2016 at 1:00 p.m. with Pastor Roger Lobb officiating. In lieu of flowers, memorial gifts in Jack’s memory may be made to support the body donation program at the University of Calgary; cheques should be made payable to “University of Calgary” with “Body Donation Program in the Department of Anatomy” written in the memo line, and mailed to Fund Development Office, Cumming School of Medicine, University of Calgary, 3330 Hospital Drive NW, Calgary, Alberta, T2N 4N1. Condolences may be sent through www.saamis.com or to condolences@saamis.com subject heading Jack Harmon. Funeral arrangements are entrusted to