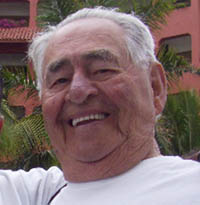 Alex Jassman of Burstall Saskatchewan passed away on January 13, 2016 in the loving arms of his best friend Jackie Jassman. Alex was 81 years old. He passed away in his paradise, Mazatlan Mexico.

Alex was born on June 11, 1934 in Mendham Saskatchewan and moved to Burstall in 1975 where he was the local plumber. Alex met the love of his life in 1988. Alex was very active in his community, he played baseball, hockey and curled for many years. Alex also loved fishing, hunting, camping, and travelling.

Alex was a Lions member for many years and still was an active member on his local club at his passing. He helped the community whenever possible as he had a lot of pride in his community. After his retirement in 2000 from field operating he began his life of travel. Jackie and Alex travelled across Canada and the US, Jamaica, Mexico, Dominican, and many places in between. In 2004- 2007 Jackie and Alex became camp hosts for Moose Lake, Alberta. In 2008 -2015 they were camp attendance at Crane Lake, Alberta. Alex met many people on his journeys that he held close in his heart, he was loved by so many as he was always full of smiles and so much humour. He treated everybody as his equal and everyone was important to him. He will be missed by all who knew him and loved him.

A Celebration of Life will be held at the Burstall Community Hall on Wednesday January, 20 at 2:00 pm.

As an expression of sympathy donations may be made to a charity of ones choice.