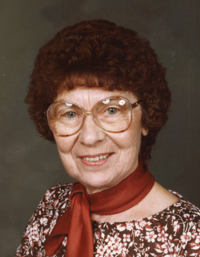 Mary “Carrie” Caroline Gilchrist, beloved wife of William “Bill” Gilchrist, passed away on Saturday, January 23rd, 2016 at the age of 93 years. Carrie also leaves to cherish her memory her children, T. Lindsey (Sharon) Reid and Rhonda (Darryl) Shoemaker; two grandchildren, Marissa (Derrick) Jordan and Gordon Shoemaker (Jenn Bomersine); three great grandchildren, Marlee and Lara Jordan and Khloe Baker; one brother, David (Bev) Westerby; one sister, Pearl Cox; two step-grandchildren, Claudene (Dan) Watt and Trevor (Laura) Baker; as well as numerous nieces and nephews. Carrie was predeceased by her first husband, Gordon Reid on August 19th, 1966; her son, Ron Reid in 2009; one granddaughter, Cynthia Baker in 1990; her parents; and eleven brothers and sisters. Carrie was born on October 23rd, 1922 in Llandebie, County of Carmarthen, Wales. She arrived in Canada with her family when she was 3 years old, and resided in the Rainy River District in NW Ontario. It was there she met her first husband Gordon, and they were married in 1941 prior to his deployment over seas during WWII. When Gordon returned from serving in the war they purchased a restaurant in Winnipeg and soon welcomed their son Ron. Following Ron’s birth they purchased a dairy farm back in the Rainy River District where both Rhonda and Lindsey were born. In 1953, her husband contracted Polio. They left the farm and move to Barwick until his passing in 1966. Carrie moved to Winnipeg in 1970 and worked in the food industry as a sous chef. She met Bill and they married in 1979. She then moved to Portage La Prairie, MB where Bill worked as a Civil Servant for the Armed Forces. They continued to reside there until Bill’s retirement in 1987. They moved to Medicine Hat in 1988 to be closer to family. Carrie was an amazing cook, gardener and accomplished seamstress. She loved to knit and crochet, took great pride in her yard, and was extremely committed to her faith and her church. Though tiny in stature she was fearless. When she set her mind to something she was unstoppable. She wore many hats in her lifetime, and wore them all well. The Funeral Service will be held at SAAMIS MEMORIAL FUNERAL CHAPEL, 1 Dunmore Road SE, on Saturday, January 30th, 2016, at 1:00 p.m. with Pastor Lance Duncalfe officiating. A private interment will take place at Saamis Prairie View Cemetery. In lieu of flowers, memorial gifts in Carrie’s memory may be made to The Gideon’s International, Suite 177, 1415 – 28th Street SE, Medicine Hat, Alberta, T1A 8P9. Condolences may be sent through www.saamis.com or to condolences@saamis.com subject heading Carrie Gilchrist. Funeral arrangements are entrusted to