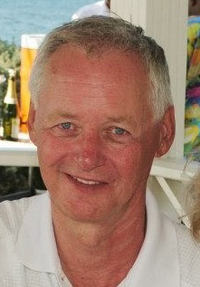 It is with heavy hearts we announce the passing of Garry Willis, with his wife, Hazel, and sister, Debbie at his side, on Wednesday January 27th, 2016, after an undeniable “woe is NOT me” and “it is what it is” attitude, Garry succumbed to his battle with Glioblastoma.

Garry was predeceased by his parents, Ralph and Louise Willis; his in-laws, Dave and Maggie Glass; his godfather, Red Newnham; and niece, Kimberly Glass.

Garry, born in Medicine Hat on January 25th, 1950 and spent almost all of his life in Redcliff. After working at several different jobs, from Dominion Glass to electrical work, he landed in the Oil and Gas industry which included working at Merland and building the Red Gas plant in Redcliff. After the shut-down of Domglas, Garry ventured out on his own as a consultant with Petro Canada and then Suncor, Resden, and finally CNRL until his retirement in 2014. He joined the Redcliff Volunteer Fire Department in 1980 and served with pride for 25 years. The Redcliff Legion was Garry’s go-to place – you could always find him there in a circle of friends. At the Legion, he was a member of the Executive and held the position of First Vice. Although Garry never wanted to be the center of attention, his antics and sense of humour put him there more often than not.

Garry and Hazel were married September 21st, 1979 and have lived in Redcliff for their entire marriage. In 2005 they moved into their dream home they built overlooking the coulees and South Saskatchewan River. They were true soul mates and each other’s rock. Their love of travel, golf, family, and friends made for many years of love and laughter together.

Garry and his sister, Debbie, had a very special bond that went well beyond a sibling relationship. They were each other’s pillar of strength, supported each other no matter what, and loved each other unconditionally.

Garry, Hazel, and family have felt, and continue to feel the circle of love from everyone. They wish to express their gratitude to the many people who supported them over the years, especially this past year. The family would like to extend their gratitude to Dr. Kelly, Dr. Nordal, their staff, the nurses, and radiation technicians of the Foothills Hospital. Thank you to the Oncology nurses and staff at the Tom Baker Cancer Center for all you do. Thank you Dr. J. Esaw – we can only hope that anyone that has to endure a journey like Garry’s, takes it with you. Also, thank you to the Foothills Patient Hostel, the numerous doctors, nurses, technicians, and staff of the Medicine Hat Regional Hospital ER and 4 West, and finally, St. Joseph’s Home.