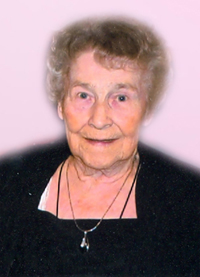 Mrs. Irene Gans, beloved wife of the late Mr. Edwin Gans, passed away peacefully at Sunnyside Nursing Home, on Friday, February 5, 2016, at the age of 90 years. Irene will be forever remembered in the hearts of her son, Wes Gans and his wife Coleen who was Irene’s living angel; their son, Chad (Amy) Gans; grandsons, Kolter and Keaten; granddaughter, Derrian; her sister-in-law, Violet Gans. Irene was predeceased by her husband, Edwin; two brothers, three sisters and five brothers-in-law. Irene was born on October 27, 1925, in Burstall, SK., and attended school at Alexander Plain. Her first and last job was at a hardware store in Leader where she met the owner’s son, Edwin Gans after he was discharged from the army. They were married on November 9, 1945, and Edwin continued to work with his dad and brother in the family hardware business. In 1995, Ed and Irene retired to Medicine Hat. After Edwin’s passing she moved into Chinook Village where she made many friends and enjoyed playing cards and shuffleboard until her health began failing in 2012. She then moved to Valleyview, CypressView and finally toâ€ˆSunnyside where she resided until her passing. The family wishes to thank all of her caregivers over the years, your kindness and caring was deeply appreciated and didn’t go unnoticed by the family. Mom loved her hockey and was a Tiger season ticket holder for a number of years with the highlight being able to watch her only grandson, Chad play in the WHL. In later years when she was no longer able to attend the Tiger’s games, she was an avid listener of Bob Ridley. Before her health took a turn for the worse, she got to see the Tigers play in the new Canalta Centre. Irene lived a very simple and routine driven life. All of her life, she loved shopping for clothes, perusing the grocery flyers, entertaining and cooking family suppers. They will miss her fresh buns, Krut Bierocks and chokecherry jam. Some of her desert cakes (ice box and chocolate log) which became family favorites will continue to be family favorites. Another favorite past time of Irene’s was sewing, spending countless hours on new projects and patching jeans. Her legacy will live on in the hearts of her family. The Celebration of Irene’s life will be celebrated at Victory Lutheran Church, 2793 Dunmore Road S.E., Medicine Hat on Wednesday, February 10, 2016, at 11:00 a.m. with Diaconal Minister Lila de Waal officiating. A private interment will take place prior to the service in the Hillside Cemetery. (Condolences may be expressed by visiting www.cooksouthland.com ) In lieu of flowers, memorial donations in Irene’s name maybe made directly to Victory Lutheran Church, 2793 Southview Drive S.E., Medicine Hat, AB, T1B 2H1. Honoured to serve the family is