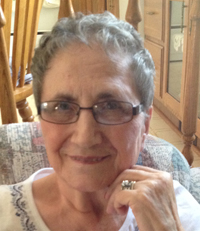 Mrs. Mabel Senft of Medicine Hat, beloved wife of the late Clarence Senft of fifty-two years, passed away with her children by her side on Monday, February 8th, 2016 at the age of 81 years. She leaves to cherish her memory her daughter, Verla Mae Senft; her son, Ivan Roger Senft, both of Medicine Hat; two brothers, Raymond (Pearl) Croissant of Moose Jaw, Saskatchewan and Murray (Junette) Croissant of Melville, Saskatchewan; one sister, Selma Godlien of Kehiller, Saskatchewan; three sisters-in-law; as well as numerous nieces and nephews. Mabel was predeceased by her father, Edward Croissant in 1961; her mother, Carrie Croissant in 1975; two brothers; one sister; one sister-in-law; two brothers-in-law; two nieces; and a nephew. Mabel was born in Meyonne, Saskatchewan but was raised at Woodrow, Saskatchewan on the family farm. In 1952 she married Clarence Senft and they farmed together at Hodgeville, Saskatchewan. Then in 1962 they moved to Swift Current, Saskatchewan where they raised their two children and still continued to farm. In 1983 they retired from farming and in 1987 they moved to Medicine Hat where they continued to reside. Mabel was very active in the Christian Missionary Alliance Church in Swift Current. She sang duets and loved to sing with her husband and daughter. Mabel taught regular Sunday school as well as Chinese Sunday school for the Chinese Church held in the Christian Missionary Alliance Church. She was so very proud of her Chinese Sunday School Students as one of them became a concert pianist and later played piano for the church. Mabel liked to do needlework and especially loved to sew. When she was stricken with cancer the thing that bothered her most was that she had to leave her sewing room; it was her relaxation room and where she spent many hours. Mabel was a devoted mother to her two children, Verla and Ivan and she will be greatly missed. Those wishing to pay their respects may do so at SAAMIS MEMORIAL FUNERAL CHAPEL, #1 Dunmore Road SE, on Thursday from 12:30 until 1:25 p.m. The Funeral Service will be held at SAAMIS MEMORIAL FUNERAL CHAPEL on Thursday, February 11th, 2016 at 1:30 p.m. with Reverend Art Brown officiating. A private interment will take place at Hillside Cemetery. Memorial gifts in Mabel’s memory may be made to charity of one’s choice. Condolences may be sent through www.saamis.com or to condolences@saamis.com subject heading Mabel Senft. Funeral arrangements are entrusted to