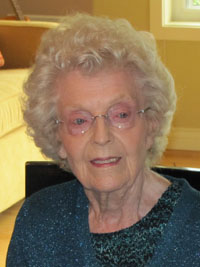 Frances, our beloved mother, grandmother, and great-grandmother, died in her home February 12, 2016, surrounded by her loving family. She left this world with the same humour, grace, and dignity in which she lived every day of her life.

Born in Belfast, Northern Ireland on April 25, 1918, to Frances and Robert Foster, Frances was one of 8 children. She is predeceased by her husband of 65 years, Norman Anderson. Frances is survived by her children Norman Anderson, James (Margaret) Anderson, and Margaret Anderson Koch; 7 grandchildren and, 4 great-grandchildren, and numerous nieces and nephews.

Frances grew up in Belfast, Northern Ireland, with her 3 sisters and 4 brothers. At the age of 17, she left her home to pursue a career with Unilever in London, England. This is where she lived when WW II broke out and she enlisted in the RAF. It is during this time she met her handsome Canadian husband who was in the Canadian Division of the RAF. They were married on December 11, 1943, and endured the following war torn years often being apart and never knowing when or if they would see each other again. At the end of the war Frances followed her husband, and as one of the many war brides who left their homeland, she arrived in Canada in April 1946. Norman and Frances lived in his hometown of Medicine Hat, Alberta, where they built their life together and raised their family. This is where they shared their life until the passing of Norman in February 2008. Frances then moved to Victoria in 2009 to live in the home of her daughter Margaret and grand-daughter Shauneen (Brian) Koch and two great grandchildren, Roan and Zaida Koch-Gerritsen. She loved living in a home where she was the matriarch of 4 generations and she loved living her final years in Victoria as it brought her closer to her family located on the West Coast. Frances would often say how much Victoria reminded her of her Irish homeland. Frances continued to do the things she loved right up until her final days. Her hand knit sweaters, her beautiful quilts, and her love of gardening are some of the things that will live on in the generation that follows. Her wonderful Irish sayings, her tenacity and spirited way of living, and the wisdom she shared are only a few of the things that will be sorely missed.

Those who knew and loved Frances will miss her sharp Irish wit, her keen sense of humour, and loving and generous heart. She was much loved and would agree that she had lived an amazing life. Special thanks and appreciation go out to Dr. David Woodley who went above and beyond our expectations in his care of our beloved Frances. Also a special thank you to granddaughters Sheri Anderson and Shauneen Koch whose loving and healing hands provided such comfort to Frances in her final hours.

A celebration of Frances’ life will be held at 12:00, Saturday, February 20, 2016, in the Fireside Room at the Victoria Church of the Nazarene, 4277 Quadra Street, Victoria, BC. Pastor Gary Bennett officiating. Donations to her memory can be made to the Rainbow Kitchen, the Mustard Seed Bank, Bridges for Women, or a charity of your choice.