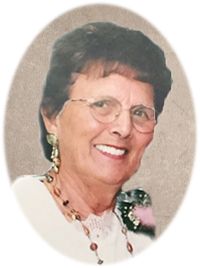 Mrs. Shirley Ellert of Medicine Hat, beloved mother and grandmother, passed away peacefully surrounded by her family on Sunday, February, 28th 2016 at the age of 84 years. Shirley leaves to cherish her memory six children, Lou (Bernie) Ellert, Lorne (Shirley-Anne) Ellert, Mary Ann (Barry) Nolan, Kim Ellert (Rhonda Leier), Lorrie (Jerry) Klassen, Shelly (Stacy) Ellert; thirteen grandchildren; eleven great grandchildren; one sister, Marlene Dolter; special friend, Audrey; and numerous nieces and nephews. Shirley was predeceased by her husband, Ron; and one son, Donny. Shirley was born on March 10th, 1931 in the district of Khedive, Saskatchewan. She married the love of her life, Ron, on June 14th, 1949 in Moose Jaw and together they made their home and raised six children in Gull Lake. In addition to farming and teaching square dancing with Ron, Shirley enjoyed her flower shop, gardening, bridge, and golf. In 1995, Shirley and Ron retired to Medicine Hat where she continued to enjoy golf, bridge and watching the Blue Jays and Raptors. Shirley loved spending time with her children and grandchildren and will be dearly missed. Those wishing to pay their respects may do so at SAAMIS MEMORIAL FUNERAL CHAPEL, 1 Dunmore Road SE, on Wednesday from 7:00 until 9:00 p.m. and on Thursday from 12:30 until 1:25 p.m. The Funeral Service will be held at SAAMIS MEMORIAL FUNERAL CHAPEL on Thursday, March 3rd, 2016 at 1:30 p.m. with Father Philip Le officiating. In lieu of flowers, memorial gifts in Shirley’s memory may be made to the Salvation Army, 164 Stratton Way SE, Medicine Hat, Alberta, T1B 3R3. Condolences may be sent through www.saamis.com or to condolences@saamis.com subject heading Shirley Ellert. Funeral arrangements are entrusted to