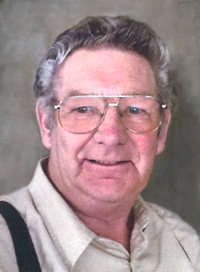 The world lost a great man February 27th, when RONALD JAMES COOMBES said goodbye to his family and friends for a final time. Ron will be remembered as a gentleman with a wonderful sense of humour and a loving and generous spirit that had its foundation in family and extended to all those around him.

Ron was born and raised in Headley, England before immigrating to Canada in 1967 with his wife Georgina “Jean” (nee Payne) three daughters, and $121 in his pocket. In Canada, they soon added a son to their family. A lifetime carpenter, Ron was proud of his first job in his adopted homeland at the Sash and Door. He later worked on the construction at the University of Lethbridge, and as a foreman at Fica Cabinets and Elite Wood Cabinets. He ran his own businesses – South Country Kitchens and Ron’s Carpentry, while helping family and friends build their own homes in his spare time.

Ron dreamed of a robust and active Coalhurst branch of the Royal Canadian Legion. After years of meeting in the local elementary school basement, he eventually led a group of volunteers to build a beautiful Legion headquarters that still serves as the hub of the community.

He served on Coalhurst Town Council for 12 years, including several as the Deputy Mayor and was instrumental in helping the Hamlet of Coalhurst gain Village and later Town status. In his many years in the community, he also served on the Water Users Association, the Taxpayer’s Association, and the Coalhurst Branch (#273) of the Royal Canadian Legion, where he had an honorary lifetime membership and had served as President and Executive Officer.

Ron’s family and friends will remember his goofy humour, his passionate love for his wife of 53 years, his love for a good sing-a-long, his passion and pride for his family, his natural and unspoken protective nature, his work ethic, and his fierce hugs. Our lives won’t be the same without him.

Ron powered through many years of poor health with amazing strength and dignity. His family would like to extend their heartfelt gratitude to Dr. Janzen, Tara Evans (RN) and the staff at the Heart Function Clinic at Chinook Regional Hospital, where he received excellent care for many years. They would also like to thank Dr. Benke for his gentle consideration and treatment of Ron; and a special thank you to the nurses and staff on 4C at CRH, where he was treated with kindness and dignity in his final hours.

In lieu of flowers, the family respectfully ask family and friends to make a donation to the Heart Function Clinic c/o the Chinook Regional Hospital Foundation.