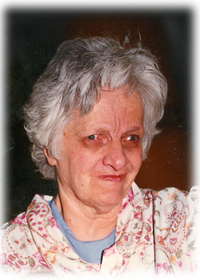 It is with sadness that we announce the passing of our aunt, Amelia Pearl Johnston (aka Pyrl), on Saturday, March 5, 2016, at the age of 91 years. Aunty Pyrl was born on June 30, 1924, and was one of the babies delivered by Dr. Gershaw (later, Senator Gershaw). Pyrl was the seventh of eight children born to Martin and Laura Johnston. At a young age, Aunty Pyrl suffered a head injury resulting in a lifelong cognitive disability. She never married, and continued to live in the old ‘Johnston house’ on Riverside until the late 1950’s. She later moved with her sister, Beulah and her family to a home on Parkview Drive. Over the years, Pyrl helped care for her nieces and nephews whom she lived with, as well as babysitting other children in the community. Aunty Pyrl loved to walk and would often take her nieces and nephews for long walks around the city; it was hard to keep up. She often walked with one niece on the hillside to Crescent Heights looking for cactus berries. One nephew recalls how much fun it was to make homemade toffee with her, especially stretching it in the yard, and Aunty Pyrl was always the first one to sample it. Her Catholic faith was important to her; even in her final years when asked to name people she remembered, Pyrl often recalled Father McCoy, who was the priest at St. Patrick’s Church during her younger years. One niece remembered the nuns as “Aunty Pyrl’s sisters”. In 1973, she was moved into long-term care, as it was difficult for family to continue to meet her increasing health needs. Aunty Pyrl’s ‘family’ expanded to include the dedicated nursing staff at Riverview Care Centre, who cared for her over the years. She was feisty and spirited to the end. Pyrl was predeceased by her siblings: Vernon (Binx), Adeline (Tiny), Beulah (Boo), Ruby, Iola (Sope), Walter (Bus) and Blanche. With her passing, comes the end of an era – the last of the “Johnston 8”. She is survived by many nieces and nephews, including her Medicine Hat nieces, Leigh-Anna Anton, Lori Marshall and Kendra Oxamitny, who would like to thank Riverview Care Centre for the loving care they provided. Also, the family would like to thank Aunty Pyrl’s compassionate care worker, Joyce Kettner, for being like a daughter to her. A graveside service will be Celebrated at Hillside Cemetery on Friday, March 18, 2016, at 2:00 p.m., with Life Celebrant Gerry Getz officiating. Those wishing to attend are asked to gather at Cook Southland Funeral Chapel, 901 – 13 Street S.W., at 1:45 p.m., to join the procession to the cemetery. If friends so desire, memorial tributes in Pyrl’s name may be made directly to the Riverview Care Centre, 603 Prospect Drive S.W., Medicine Hat, Alberta, T1A 4C2. (Condolences may be expressed by visiting www.cooksouthland.com). Honoured to serve the family is