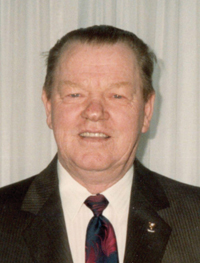 Harry Henry Schmidt of Medicine Hat, beloved husband of the late Remona Schmidt, passed away on Friday, March 25th, 2016 at the age of 91 years. Harry leaves to cherish his memory his son, Rodney (Ivy) Schmidt of Sandy Point, Alberta; three grandchildren, Keith Schmidt of Lloydminster and his children, Zachary and Taya, Kelly Schmidt of Medicine Hat, and Kane (Tanya) Schmidt of Rosetown, Saskatchewan and their son, Alexander and Kane’s daughter, Jennica Bacon; one sister, Jean (Harvey) Merritt of Saanich, BC; as well as numerous nieces and nephews. Harry was predeceased by his wife, Remona; his parents, Henry and Helen Schmidt; and his son, Warren Schmidt. Harry was born in Empress and was raised and educated in the Sandy Point area. At the age of 18, his father passed away and he assumed the responsibility of running the family farm. He met Remona in Irvine and they were married in 1949 continuing to farm at Sandy Point. In 1957, they built a home in Medicine Hat, but in 1970 they returned to the farm and built the Sandy Point Service Station which they operated until late 1982. In 1980, they had built another house in Medicine Hat which would become their retirement home. Harry will be remembered as a devoted husband, father, grandfather, and great-grandfather. Those wishing to pay their respects may do so at SAAMIS MEMORIAL FUNERAL CHAPEL, #1 Dunmore Road SE, on Wednesday from 7:00 to 9:00 p.m. The Funeral Service will be held at SAAMIS MEMORIAL FUNERAL CHAPEL on Thursday, March 31st, 2016 at 1:00 p.m. with Gary W. Goran officiating. Interment will follow in the family plot at Saamis Prairie View Cemetery. Memorial gifts in Harry’s memory may be made to the Alzheimer’s Society, #201, 770 – 6th Street SW, Medicine Hat, Alberta, T1A 4J6 or to the Margery E. Yuill Cancer Centre, 666 – 5th Street SE, Medicine Hat, Alberta, T1A 4H6. Condolences may be sent through www.saamis.com or to condolences@saamis.com subject heading Harry Schmidt. Funeral arrangements are entrusted to