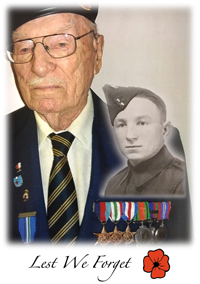 1920 ~ 2016
John Leon Buziak passed away at the Medicine Hat Regional Hospital following a brief illness on Monday, August 8, 2016, at the age of 95. He leaves to cherish his memory his wife of almost 65 years, Florence Buziak. He is also survived by his six children, Ray (Marie Johnson) of Grande Prairie; Roger (Pat Lanctot) of Medicine Hat; Beatrice Ching (David) of Calgary; Vera of Lethbridge; Val Buziak (Harry Hensel) of Lethbridge; and Carla (James Prus) of Coaldale; 14 grandchildren and step-grandchildren; 8 great-grandchildren and step-great-grandchildren; his brothers, Carl and Eddie of North Battleford Saskatchewan, and numerous nieces and nephews.
Dad was predeceased by his father, Leon and mother, Dora Buziak (nee Spak), his brothers, Mike, Albert, Tom (Stella), Raymond, Ludwig, Alex, Felix (Clara), and his sisters, Anne (Kasmier Bartkewich) and Elizabeth (Kasmier Muszko).
Dad was born near Redfield, Saskatchewan on November 5, 1920. He remained in that area during his childhood, spending time with many members of that tight-knit community, including the Chomickis, Swystuns, Pidwerbeskys, Ewanchuks, and many others.
He joined the army in 1939 and was sent to The Pas, Manitoba for basic training. Following that, he was shipped overseas and served in the United Kingdom, France, Germany, and Italy.
Upon returning to Canada in 1946, dad began working in infrastructure construction, building roads and irrigation dams. Despite spending his formative years in Saskatchewan, dad chose to make Medicine Hat his home when the company for which he worked transferred him in 1950. He invited Florence, whom he had met in North Battleford, to join him and in November 1951, the two were married and started their lives together in a small basement suite on the Flats. They later moved to the southwest hill, and finally to their home of 50 years in Crestwood. Dad spent 25 years working for Canada Post, until his retirement in 1985. For the past five years, he was residing in Sunnyside Nursing Home, where he was visited daily by Florence and frequently by his children, grandchildren, and family friends.
Those wishing to pay their respects may do so beginning one hour prior to the Funeral Service which will be held at Cook Southland Funeral Chapel, 901 – 13 Street S.W., Medicine Hat on Friday, August 12, 2016 at 1:00 p.m. with Pastor Bob Findley officiating.
In lieu of flowers, donations may be made to the Alberta Cancer Board, 710, 10123 – 99 Street N.W., Edmonton, Alberta, T5J 3H1 or the Canadian Cancer Society, 102 Crestwood Square One, 1865 Dunmore Road S.E., Medicine Hat, Alberta, T1A 1Z8. (Condolences may be expressed by visiting our website at www.cooksouthland.com) Cook Southland Funeral Chapel, 901 – 13th Street S.W. Medicine Hat, Alberta T1A 4V4 Phone 403-527-6455