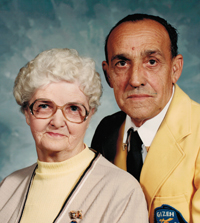 Daisy Lippert (nee Harris) was born on September 6th, 1921 in Redcliff, Alberta and passed away on November 12th, 2012 in the Vernon Jubilee Hospital at the age of 91 years.

Gus Lippert was born on April 25th, 1923 in Schuler, Alberta and passed away on September 1st, 2016 in the Vernon Jubilee Hospital at the age of 93 years.

Daisy and Gus will be lovingly remembered by their daughter, Dixie Mackie of Vernon, B.C.; their grandson, Mark Mackie of Vancouver, B.C.; and numerous extended family members. They were preceded in death by their son-in-law, Barry Mackie and all of their brothers and sisters.

Daisy and Gus were long time members of the Eastern Star, Masonic Lodge and Shriners. Cremation preceded a Reception which will take place for family and friends in the Bethel Tea Room on Tuesday, September 13th, 2016 from 2:00-3:00 P.M.

As an expression of sympathy, those who wish to do so may send donations in memory of Daisy and Gus to the Vernon Jubilee Hospital Foundation, 2101-32nd Street, Vernon, B.C. V1T 5L2.

Funeral arrangements have been made with