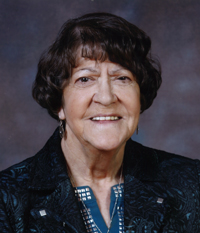 Janet “Netta” Sykes of Medicine Hat, beloved husband of the late Jeffery Sykes, passed away on Tuesday, September 27th, 2016 at the age of 76 years. Netta leaves to cherish her memory two sons, Steve (Denise) Sykes and Glen Sykes, both of Medicine Hat; ten grandchildren, Jordan, Jeremy, Julia, Justin, Jody, Jeffery, Ashley, Katie, Kyle and Brooklyn; six great grandchildren, Harley, Amelia, Kassandra, Khloe, Skylar and Mahaila; three brothers, James, Ronald and Colin; two sisters, Gina (Walter) and Marylyn; two nephews, Travis and Clinton; and two nieces, Heather and Angela. Netta was predeceased by her husband, Jeffery; her parents, George and Mary Morris; and two sons, Keith Sykes and Andrew Sykes. Netta was born on January 4th, 1940 in Scotland. She loved to dance and a long time member of The Royal Scottish Country Dancing Society and a founding member of the Highland Dancing Association of Medicine Hat. Netta also loved music and was a long time member of the Riverside Church Choir, an enthusiastic member of the Adele Armstrong Singers and was a strong supporter of the South Alberta Pipes and Drums. She was known as the ‘little scottish lady’ who worked at the Medicine Hat Diagnostic Lab for over 30 years. Netta loved spending time with her family and friends and her grandchildren meant the world to her. She will be dearly missed. The Funeral Service will be held at ST. JOHN’S PRESBYTERIAN CHURCH, 504 – 2nd Street SE, on Monday, October 3rd, 2016 at 11:00 a.m. with Reverend Dr. Nancy Cocks officiating. Memorial gifts in Netta’s memory may be made to the S.P.C.A., 55 Southwest Drive SW, Medicine Hat, Alberta, T1A 8E8 or to the Alzheimer Society, 201, 770 – 6th Street SW, Medicine Hat, Alberta, T1A 4J6. Condolences may be sent through www.saamis.com or to condolences@saamis.com subject heading Netta Sykes. Funeral arrangements are entrusted to