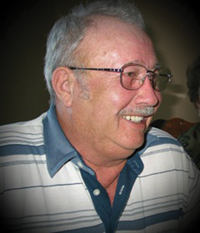 Raymond “Ray” Lloyd Darr, beloved husband of Rita Darr of Medicine Hat, passed away on Saturday, December 3rd, 2016 at the age of 77 years. Ray also leaves to cherish his memory three sons, Myron (Gabby) Darr, Leslie (Karen) Darr and Noel (Camille) Darr; one daughter, Delphine (Doug) McIntyre; eleven grandchildren; two sisters, Deloris Hann and Leona Kirk; as well as numerous nieces and nephews. Ray was predeceased by his parents, Edwin and Elizabeth Darr; one nephew, Sydney Hann in 1995; and one grandson, Daniel McIntyre in 1995. Born in Medicine Hat on November 6th, 1939 Ray (the oldest of three children) grew up in the Hilda, Leader and Burstall areas where he enjoyed playing hockey and baseball into his late teens. Later Ray spent many years coaching hockey and umpiring local baseball games in the area and in Medicine Hat.
In 1958 he met Rita at the Bank of Commerce while he was working as department manager at the Solo store on Aberdeen Street. Rita and Ray were married on February 2nd, 1959 and bought their first home in 1964. Ray later worked as the “breadman” for McGavins Toastmaster for about 6 years. In 1973, while working for McGavins, they purchased a small failing store. Ray and Rita worked endless hours and turned it into a thriving business where they made many good and lifelong friends. Their door was always open for anyone to stop in, because the coffee was always on.
In 1974 Ray was predeceased by his mother Liz. Ray and Rita purchased property near Seven Persons in 1979 and began working to develop their place of retirement. In 1982 Ray was then predeceased by his father Edwin. Deluxe Groceteria was sold in 1985, and Ray and Rita moved permanently to the Seven Persons acreage. Ray spent many years raising milk cows, exotic birds, rabbits, goats and other livestock.
Ray had a very outgoing personality, a great sense of humor, and always enjoyed telling jokes and making people laugh…… And the coffee was still always on.
Ray was very proud of his children and grandchildren, and all of their accomplishments.
As Ray’s health began to fail he was no longer able to care for his livestock and the decision was made to sell the farm in 2016. Ray and Rita moved to a condo in the city and enjoyed a more relaxed lifestyle. In recent months Ray’s health further declined.
The Funeral Service will be held at SAAMIS MEMORIAL FUNERAL CHAPEL, 1 Dunmore Road SE, on Wednesday, December 7th, 2016 at 3:00 p.m. with Deacon Robert Risling officiating. A private interment will take place at Saamis Prairie View Cemetery. Memorial gifts in Ray’s memory may be made to the Alberta Heart & Stroke Foundation, 124, 430 – 6th Avenue SE, Medicine Hat, Alberta, T1A 2S8 or to the Canadian Cancer Society, 325 Manning Road NE, Calgary, AB T2E 2P5. Condolences may be sent through www.saamis.com or to condolences@saamis.com subject heading Raymond Darr. Funeral arrangements are entrusted to
SAAMIS MEMORIAL FUNERAL CHAPEL CREMATORIUM & RECEPTION CENTRE, “The Chapel in the Park” #1 Dunmore Road SE, Medicine Hat, AB T1A 1Z5 (403)528-2599 www.saamis.com inquiry@saamis.com Locally owned and directed CGR Holdings Ltd.