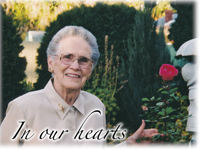 1918 ~ 2017
Mrs. Marian Rae, beloved wife of the late J.H. Spencer Rae, passed away at the Sunnyside Nursing Home in Medicine Hat on Monday, February 6, 2017, at the age of 98 years.
Marian Boyce was born on October 4th, 1918 in Okotoks, Alberta to Reta and William Fisher. She was the second of four (Donald, Betty, Bruce) children. Marian cultivated her love of the outdoors, literature and family in the little white house on Elma Street. Marian followed in her mother’s footsteps and attended Normal School. Her first teaching position was at Fawn Hill where she taught in a one room school house kindergarten through grade 12, kept the fire stoked and the horses watered. During this time many letters were sent to the handsome red headed young man John Henry Spencer Rae, whom she married in 1939. After teaching in Gem and Duchess and following the war, Spence and Marian and baby Betty Ann (1945- 1998) settled in 1946 in Medicine Hat.
The young family was joined by Bill (1947-2013), Keith (1948) and Bruce (1950). Marian was kept busy running the 8th St NE home, as well as operating a kindergarten in the dining room to stay close to her children. Marian and Spence were part of a Crescent Heights bridge club that led to life long friendships. Her active and often mischievous family kept her on her toes, and she loved every minute of it.
Marian returned to teaching in 1957 at Alexandra Junior High School, serving as the English/Social Studies department head for 10 years. She retired in 1980 from MHHS. Her commitment to students went well beyond the classroom walls as she sponsored innumerable student activities ranging from editor of the school newspaper to coaching cheerleaders.
Upon her retirement in 1980, Marian was busier than ever. Her community activities were countless – she volunteered one day a week for over 20 years at the Medicine Hat Museum, served on the local Retired Teachers’ Executive, was an active member of the Medicine Hat Reader’s Theatre, a long time member of the Riverside Book Club, participated in the Medicine Hat Historical Society and was a volunteer producer of the Cable 10 program “Prime Time’. Marian treasured her many visits to Kingston, ON., and the cottage visiting Bruce (Kathy) and his family, Keith (Mary) and his family in Wolfville, NS., as well as Elder hostel adventures all over Canada with her sister Betty. She loved to spend time with Betty Ann (Bob) and her family in Calgary and Windemere. Walking in Police Point Park was a favourite activity for Marian, Bill (MaryEllen) and his family. Marian cherished her role as ‘Gran’ to her 8 grandchildren and 12 great grandchildren as well as that of aunt. While conducting herself with the utmost of decorum, Gran was always up for a bit of fun and was a legendary story teller. Marian was a fierce bridge player, crossword puzzle aficionado and reader. To the end, she entertained all with her lightening wit and sense of humour.
Marian was a true trailblazer and a woman ahead of her time. She leaves those that loved her a legacy of insatiable curiosity, giving back, and of quiet, determined strength. In lieu of flowers, please consider a donation in Marian’s name directly to the Medicine Hat Esplanade Arts and Heritage Centre, 401- 1st Street SE, Medicine Hat, Alberta, T1A 8W2. There will be a private gathering for immediate family and close friends. (Condolences may be expressed by visiting our website at www.cooksouthland.com) Honoured to serve the family is Cook Southland Funeral Chapel, 901 – 13th Street S.W. Medicine Hat, Alberta T1A 4V4 Phone 403-527-6455