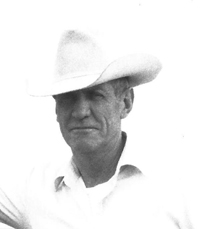 Kenneth McKnight of Duchess passed away at home near Duchess surrounded by his family and February 5th, 2017 at the age of 92. Ken was born June 7th, 1920, the son of homesteaders Robert and Jesse Mcknight on what Ken says was the driest quarter section in old Palliser’s Triangle. He was an only child as his older infant brother Keith died before he was born. His father died in 1933 when Ken was nine years old and from that point on he became the bread winner for his mother and himself. He often said there were more mealtimes than meals. He received his education in Redcliff and said he was a marginal student but it was the best pay going as he received 50 cents per day to go to school. Ken ecked out a living at a variety of low paying, labour intensive jobs such as breaking horses and digging post holes by hand all around Suffield Army Base. At the tender age of thirteen he was given a ball peen hammer and hired to mercy kill horses suffering from distemper for $1.00 per day. This was a haunting experience for him. He got work as a ranch hand with Fred Walker of Tilley and later Charles McKinnon of Bassano. In 1942 he was hired as Cow Boss for Owen Stringham located North of Duchess and in 1948 Stringham sold him the farm where he lived, raised his family and died. He married Christine Mary Nester in 1954 and they embarked on building a ranch and a life. These were humble beginnings; they worked hard and lived their lives to the fullest. Ken was a great neighbor and loved to tell stories and laugh. He and Chrissy delighted in their children, grandchildren and great- grandchildren and were their greatest fans. Ken raised a loving family and left a legacy of thousands of cows on thousands of hills. When Ken would reflect on his life he would say “it’s been a good ride.” He was predeceased by his beloved wife Chrissy on January 8th, 2017 after 62 years of marriage. He is survived by his 3 children; daughter Jeanie Culligan (Jim) and their 3 children Ryan (Erin) and their son Kagan, son Scott (Laura) and their daughter Murphy, daughter Erin Roberts (Jason) and their children Allie and Ty; son Robert McKnight (Judy) and their 2 children; son Mike (Beth) and their children Presley and Darcy and son Steve (Erin) and their children Smith and Ole; son Pat (Nadine) and their 2 daughters Tatum and Krista; 2 brothers in-law; Frank Nester and Lou Nester (Doreen), 2 sisters in-law, Lilian Nester and Louise Berg and numerous nieces, nephews and other family members. A Celebration of Ken’s Life will be held when the grass is green and there are calves on the ground. For further information please visit www.thomsfuneralhome.com or call (403) 501-1010.