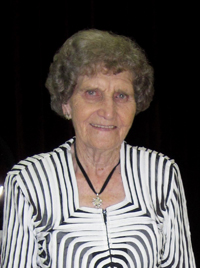 Theresa passed away on Wednesday, February 8th, 2017. Her life will be cherished by her son, Harold (Kathy); her granddaughter, Deinera (Evan); and her grandson, Kalan. She is also survived by five nieces, four nephews and their families. Theresa was predeceased by her husband, Erwin, in March of 2009. She was also predeceased by her parents, Andreas and Elizabeth Dietrich; and her sister and brother-in-law, Elizabeth and Bert Kujat. Theresa was born on September 9th, 1928 in Bingula, Yugoslavia and was raised and educated there. She came to Canada, from Austria, with her mother in December 1951 to join her sister and her family. Theresa married Erwin in 1954 at St. Peter Lutheran Church and together they had one son. Upon arriving in Canada, she worked at Medalta Potteries for a short time, and then in the maternity ward at the hospital for three years. Throughout her lifetime, Theresa was a wonderful seamstress, sewing for many people in the city. Her love of fashion led her to work at Cia’s Boutique for a number of years. Erwin and Theresa were charter members of the German Canadian Harmony Club, and long-time members of St. Peter Lutheran Church. The Funeral Service, for family and friends, will be held at SAAMIS MEMORIAL FUNERAL CHAPEL, #1 Dunmore Road SE, on Monday, February 13th, 2017 at 11:00 a.m. with Reverend Canon D. Gene Packwood officiating. The family requests no flowers and asks that you follow Theresa’s advice, “Go and have fun and enjoy life while you can.” Condolences may be sent through www.saamis.com or to condolences@saamis.com subject heading Theresa Exner. Funeral arrangements are entrusted to SAAMIS MEMORIAL FUNERAL CHAPEL CREMATORIUM & RECEPTION CENTRE, “The Chapel in the Park” #1 Dunmore Road SE, Medicine Hat, AB T1A 1Z5 (403)528-2599 www.saamis.com inquiry@saamis.com Locally owned and directed CGR Holdings Ltd.