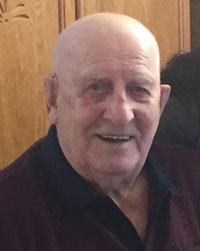 May 20, 1916 – February 12, 2017
It is with great sadness that the family announce the passing of Albert (Bonnie) Bohnet quietly while sleeping, three months short of his 101st birthday, at the Stanton Hospital in Yellowknife.
Albert was born in southern Alberta. During the war he served with the Royal Engineer Corp erecting signal towers in Fort Smith and Fort Simpson. He married Febula Marie Heron in 1945 and they made Fort Smith their home.
During his time in Fort Smith, he drove truck for the Hudson’s Bay Transportation Co, worked with Wood Buffalo National Park, operated heavy equipment during the building and maintaining of the roads in and around the Park, was Town Foreman and his favorite job was as Heavy Equipment Instructor in the early Days of Aurora College. He served on the Village Council before Fort Smith became a Town. After he retired he operated a janitorial supply company and was voted Citizen of the Year for his volunteer work transporting senior citizens. He very much loved Fort Smith!
Bonnie was an avid curler and once competed in the senior’s category at the National level. He very much enjoyed watching curling on television in his latter years. Besides his garden, His other passion was cribbage. He was always ready to play a game with all comers at any time.
Albert is lovingly remembered as a father, grandfather, great grandfather and a good friend to many. Left to miss him dearly are his children Darryl (Shirley), Gary (Karen), Gordon (Mabel) Wanda (Dave) Powder and Delbert and his last remaining sister Ethel Lantz.
His Grandchildren, Shirley Anne Coumont, Darryl Jr., Samantha, Pamela (Todd) Hayward, Kelly Kubik, Collista Cole, Sevn (Stacey), Seth (Tina), Bonita, Wade, Amber (Wayne) Simpson, Wendana (Kirk) Wright, Tamera (Benjamin) Schaffer and Aurora. His Great grandchildren; Kyle and Dylan Coumont, Darian, Evelyn and Victoria Hayward, Cody and Kia Cole, Ryver, Brianna, Brook and Kayla McNally, Harlow, Jaida Ejericon, Shiloh, Eli, Delila, Faron, Aleyna, Asper, Kayden and Mayva, his many friends and many many nieces and nephews.
Albert was predeceased by his wife Febula, his daughter Dorothy Kubic his son Robert, his parents Adam and Elizabeth, his siblings Daniel, Elizabeth Kellar, Lydia Yanke, Conrad, Richard, Benjamin, Michael, Ester Meier, Mead Bottcher, Myrtle Schwartz, Martha Lantz, Jacob and Irene Popel.
Internment is at the Lake View Cemetery in Yellowknife, NT.
In lieu of flowers donations made to Avens a Community for Seniors would be greatly appreciated.
Funeral arrangements by McKenna Funeral Home in Yellow Knife, NWT.

One Condolence for “ALBERT EMANUEL BOHNET”