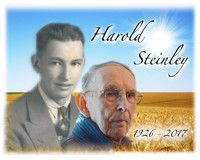 1926 – 2017
It is with sadness as well as joy that the family of Harold Robert Steinley announce his peaceful passing on Friday, February 10, 2017. The sadness is because he will be greatly missed; the joy is that he is now with his beloved Tina, who passed June 14, 2016. Harold was not ill. He was lonely for the woman to whom he had been married for 64 years. He told all his visitors and caregivers on Thursday that, in his words, “I have kept my wife waiting for far too long”, and “My place now is with Tina”. Harold was proud of the fact that he was 90 years old, the same age as the Queen. Born in Empress on August 5, 1926, Harold spent his life farming, which began with his parents, Lena and Edward Steinley, in the Mayfield District. In 1949, he began farming jointly with his brother, when they purchased the Rowles farm. Harold pitched many a baseball game with the Empress team for about 10 years. His father had a policy that the summer fallow be worked and the chores be done before attending a sports day. So there were times when he would work day and night to take part in his favourite activity. He remained a loyal Blue Jays fan as baseball was the second love of his life. Harold met Christina Dirk when she came to Empress from Prelate to work at the hospital. According to Harold, it was love at first sight, and they were married on December 27,1951. They raised four children: Audrey, Lucille, Nola and Martin. Tina and Harold later purchased Grandpa Fred Steinley Sr.’s land and Stan Smith’s land, farming them for many years. They moved their residence from the farm into the town of Empress, as Harold put it, so the children would not have to endure the long bus ride to school. Harold joined the Masonic Lodge and later the Preceptory and was very honoured that he was then invited to join the Shriners. In 1970, due to the lack of wheat sales, Harold and Tina purchased the local grocery store, which they owned and operated for several years. Harold also had a partnership in a snowmobile business. He was enterprising and ambitious and always ready to try a new adventure. Harold was very philanthropic and this benefited the town of Empress greatly. While he was on Town Council and Mayor from 1976 to 1983, he built a solid relationship with the local MLA and during this time some of the accomplishments that were made were: a second water well for the town; a new water system; a new hospital; a manor for the elderly; an airport was built; a new bridge over the Red Deer River; a senior citizens recreation centre and….many trips were made to meetings and conventions in order to save the Empress school from closing. The completion of these projects were quite a feature for a small town and Harold was integral in every facet of their development. Harold and Tina retired in 1985 and then moved to Medicine Hat in 1994; at which time they built their dream home. Here they enjoyed the view, the river, the wildlife and especially the birds. Many wonderful memories were created in this beautiful home on the South Saskatchewan, as they loved to entertain. Family and friends were always greeted with enthusiasm, wonderful food and incredibly warm hospitality. When this large home became too much for them to care for, they downsized to Chartwell Gardens, a community that they enjoyed very much. Harold will be remembered by many friends and also his children: Audrey McLemore (Buck), Lucille Bishoff (Leonard), Nola Skappak (Dwaine), all of Medicine Hat, and Martin Steinley (Kathleen) of San Diego, California. His grandchildren: Jeremy Bishoff, (Calgary), Jessica Senkiw (Medicine Hat), Dan Petersen (Calgary), Alexander, William and James Steinley (San Diego). His great grandchildren: Ava Senkiw, Bodie Senkiw, (Medicine Hat), Celes Skappak and Max Skappak (Calgary), and his two sisters: Bernice Kisslanko (Oyen) and Lillie Hern (Medicine Hat). Harold was predeceased by his wife Christina Steinley; his grandson, Jordan Skappak; his parents, Lena and Edward Steinley; his brothers, Walter, Edward and Allan Steinley and his sister, Gladys Bohonos. There will be a celebration of music and of memories at Cook Southland Funeral Chapel, 901 – 13 Street SW, Medicine Hat on Friday, February 17, 2017, at 1:00 p.m. Interment will follow at Hillside Cemetery. The family extends a heartfelt invitation to all who may wish to attend, to enjoy the live music, and to reminisce and share in the honouring of a life well lived! (Condolences may be expressed by visiting our website at www.cook southland.com) Harold’s family asks that in lieu of flowers, each person consider donating some of their most valuable asset… their time… to a lonely person in a care facility. “It broke our hearts to observe just how many of the elderly have no one – to advocate for – or to even sit by and hold their hand. Our prayer is that you will heed this message and make a difference.” Memorial donations may be made to the Empress & District Historical Society, Box 272 Empress, AB., T0J 1E0. Honoured to serve the family is
Cook Southland Funeral Chapel, 901 – 13th Street S.W. Medicine Hat, Alberta T1A 4V4 Phone 403-527-6455

One Condolence for “HAROLD STEINLEY”