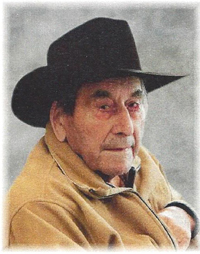 Paul was born on June 7, 1917 in the Rocky Mound District, which is on the north slope of the Cypress Hills near Maple Creek, to his parents Max and Elizabeth Eremenko. Paul was the third youngest child of a family of nine kids. Paul told stories that when he was growing up all the kids in the family were expected to help out on the farm. This included milking cows, caring for pigs, chickens, turkeys, and also gathering hay and picking rocks.

In his younger years, Paul served almost four years in the army. He did not go overseas for World War II however he got to travel across western Canada for training. His military training took him from Regina to Prince George to Victoria. For a young farm boy from Maple Creek, he got the opportunity to see the country and meet new people that would become close friends.

Back in his day, Paul was quite the musician. He played the ukulele, tanner banjo, and accordion. He even had a band with his older brothers. Normally Tony would play the saxophone, Pete played the violin, and Nick played the Spanish guitar. They had quite the name for themselves and would play at Rocky Mound, Downey Lake, Cypress School, Smith Field School, barn dances, house dances, and even wedding dances.

In 1957, Paul married Susie Stahl. This September they would have been celebrating their 60th anniversary together. They settled on the old Dave Brost place that Paul had purchased a year before. This is where they worked together to raise a family and a herd of Hereford cattle. Paul and Susie raised both of their sons Leslie and Barry on this ranch. This is where some of their best years took place.

Eventually, Les and Barry were playing a larger role in the daily operation of the ranch so Paul and Susie made the move to Maple Creek to semi-retire. Although they were living in town, they really weren’t retired. Paul was going out to both the boy’s places to help and Susie would help out with babysitting and cooking.

One of Paul’s biggest pride and joys was his garden. Now this was no ordinary garden that was 10 by 10 feet and just growing lettuce. No, this garden was over half an acre with a cornucopia of vegetables and fruit. He literally was growing everything from potatoes to strawberries. Paul had a garden all the way up until he was 95 years old. At the end, he converted their back yard into one big garden, and you could always find Susie out their helping him in summer.

Funeral service was held on February 16, 2017 at the Salvation Army Church, with the ceremony officiated by Captain Ed Dean. Interment took place at the Maple Creek Cemetery. Funeral arrangements entrusted to Brinkley’s Funeral Service. Condolences may be offered to the family at www.binkleysfuneralservice.com

One Condolence for “PAUL EREMENKO”