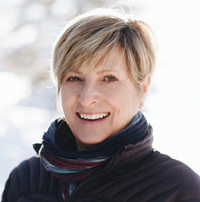 Loved deeply and truly treasured, Marty will be honoured by her family and friends as a loving daughter, caring sister, devoted wife, amazing mother, and supportive friend. A life cut short at age 53, Marty’s passing leaves a profound void. Cherishing her memory are husband Stuart (Stu), children Drew and Jillian; parents John and Carol Snedden; sisters Shann Snedden (Alan Mayer), Megan Fischer, and Lisa Mackey (Jim); nieces Kady Fischer, Erica Mayer, Sarah Mackey, and Erin Mackey. Marty was born and raised in Medicine Hat, Alberta. She enjoyed numerous activities growing up, including figure skating, skiing, 4-H horse club, swimming and serving as a lifeguard, hiking, and playing trumpet in the Medicine Hat High Jazz Band and the Medicine Hat Police Band. Marty graduated from the University of Alberta in 1985 with a Bachelor of Science in Home Economics. She then spent a year travelling in Japan and attending Japanese Language School. Following her return, Marty went on to acquire a Bachelor of Commerce in 1989 from the University of Alberta, followed by a Chartered Accountant designation in 1991. She met her husband Stu after returning to the University of Alberta in 1989, and they married in 1991. During this time, she worked as a Supervisor at Coopers and Lybrand Chartered Accountants. In 1993, she went on to become the Controller at Upper Lakes Group Inc. for the Heritage Pointe Golf Club, Development and Water Utility. In 1994, Marty and Stu welcomed their son Drew. Shortly thereafter, Marty, Stu and Drew moved into the Heritage Pointe community where they have lived ever since. In 1996, their daughter Jillian was born. Choosing a different career path, Marty retired as a Chartered Accountant in 1997 in order to focus all of her efforts on being the extraordinary mother that she was. A dedicated and full-time volunteer, Marty was actively involved in her children’s lives. She was an integral part of the Good Shepherd School Hot Lunch Fundraising Program, the John Paul II Collegiate Magazine Fundraising Program, and was Treasurer for the Holy Trinity Academy Band. In addition, Marty assumed numerous roles with the Okotoks Minor Hockey Association, including Fundraising Coordinator, Treasurer, Jersey Mom, DVD and scrapbook producer, and dedicated chauffeur. Throughout her life, Marty was an avid gardener and passionate steward of the outdoors. Growing up in and around Waterton Lakes National Park, she spent many summers hiking and backpacking with her friends and family. In recent years, she acquired her Outdoor Council of Canada Field Leader Certification in map reading, backcountry first aid, and joined the Calgary Weekend Hikers. This past year, Marty was engaged as a Trail Steward for the Ann & Sandy Cross Conservation Area.

“You will forever live in our hearts.”

A Celebration of Life will be held at a later date. In lieu of flowers, donations to the Ann & Sandy Cross Conservation Area would be greatly appreciated. www.crossconservation.org/donate (20-194001 160 Street West, Foothills, AB T1S 4K9) Condolences may be left for the family at www.snodgrassfuneralhomes.com Arrangements in care of Snodgrass Funeral Homes – Okotoks